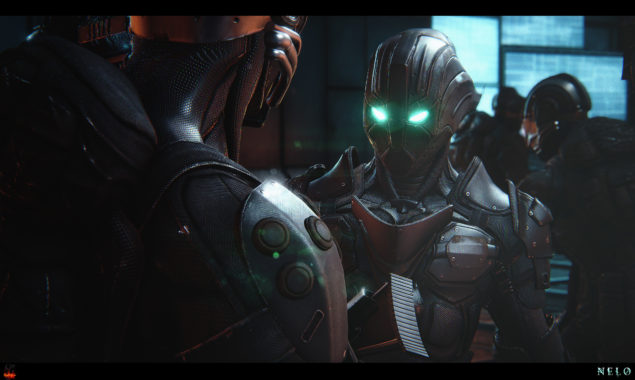 If you like extremely fast paced action games based in a Sci-fi setting, Nelo might interest you. Developed by a core team of two developers (who founded the Magic & Mirrors team) with the help of independent contractors, Nelo has just exceeded the minimum goal of its Kickstarter campaign.

Here's an overview provided by the creators:

Nelo is a hyper fast, sci-fi action game that has its own twists on the twitchy shoot em up game genres. Nelo is designed for gamers who want their reflexes to be put to the test using new mechanics for shooters and is also for gamers who want to immerse themselves in an out of this world sci-fi epic. Nelo hybrids gameplay of twinstick shooters with modern action games, as well as offer many other unique mechanics and gameplay scenarios. It takes inspiration from retro-like shooters such as Geometry Wars and Robotron 2084 and turns it into an intense, 3 dimensional action-adventure experience with a gritty, sci-fi art direction.

With three days remaining, Nelo will be trying to unlock some stretch goals which include the addition of multiplayer modes. At $40K, the team will add the usual Team Deathmatch and Free-for-All Deathmatch modes, while at $90K even Mech Suit and Space Combat modes would be added.

Nelo, which has already been approved by the Steam community via Greenlight,  can be tested thanks to a Pre-Alpha demo available for download at this address.

It will be available on PC first, but the creators have confirmed that they really want it on PlayStation 4 and Xbox One as well. That's partly because they're recommending gamepad as the most optimal input device, due to character's movement being more critical than aiming in Nelo. You can take a look at some Pre-Alpha gameplay below.