If you thought that MediaPad X2 was the last large screen slate that Huawei was going to showcase this year, prepare to be proved wrong. The Chinese tech firm has unveiled yet another tablet, named MediaPad M2. Unlike MediaPad X2, MediaPad M2 is most likely going to be the faster variant, with an octa-core processor clocked in at 2 GHz. While all the information currently available on the product is that it will feature the company’s homegrown Kirin 930 SoC, there are no details present on which processor is running inside MediaPad M2. However, we are certain that Huawei will refrain from using Cortex-A57 due to its overheating and power consumption attribute so the only other lead that we are left with is that it will feature Cortex-A53, albeit running at a much higher clock frequency.

Apart from featuring a powerful octa-core processor, MediaPad M2 will have its performance and energy efficiency supplemented by 2 GB of RAM and a 4,800 mAh battery. The tablet itself with possess a screen size of 8 inches, which will be rendering a resolution a 1920 by 1200 pixels. On-board memory will be a bit on the low side (16 GB), but MediaPad M2 features a MicroSD card slot (most likely expandable to a limit of 128 GB). The Lollipop 5.0 update will be running ‘out of the box’, and the product will be assimilated with an 8 MP/2 MP camera sensor combination.

Additionally, MediaPad M2 will cater to all needs of the user since it also features a Cat 4 LTE modem (this variant will feature a higher price tag), a Bluetooth 4.0 feature, GPS module and last, but certainly not least, an NFC chip. Pricing details of tablet variants have been given below: 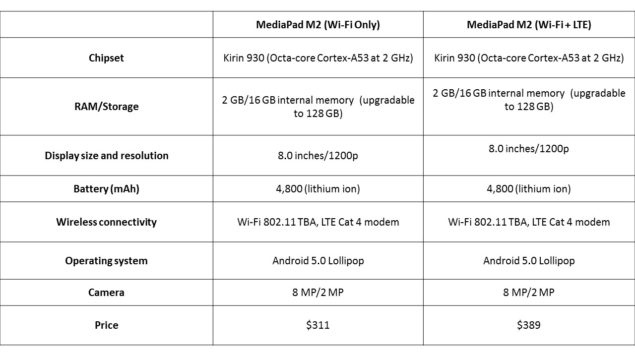 While the tablet is not exactly the cheapest of solutions, it is still marginally better compared to products like Nexus 9. Regardless, for a large screen product that offers you everything but the kitchen sink and still features a retail price that is less than $400, well, all we have to say is that we have found a winner.