Another piece in the HTC One M9 puzzle ahead of the device's launch today at the MWC in Barcelona has been posted online. After the device leaked out in its entirety (Once again) yesterday in a comparison video made at MWC, this time its retailer Best Buy who has gone ahead and listed the device on its site with its price and complete specifications.

A look at the device's listing on Best Buy today gives us a hint at what price we can expect for HTC's and Android flagships coming with the Snapdragon 810 and other top notch specifications in general. The 32 GB variant of the HTC One M9 has been listed with a price tag of $649.99 and is listed with AT&T's Next option on the retailer's website. In addition to the price, several specifications of the device have also been listed today. You can take a look at them below. 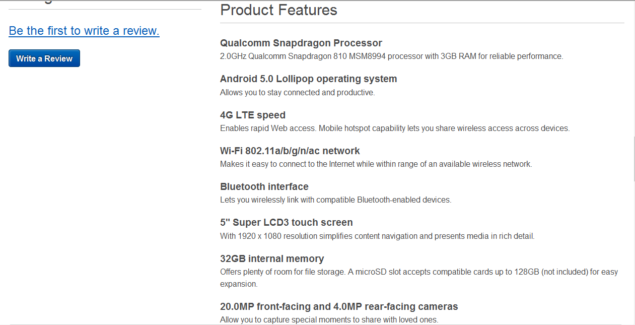 As expected before, and further collaborated by today's listing, HTC's flagship will be coming with Qualcomm's Snapdragon 810 on board. The Snapdragon 810 is the company's first octa-core, 64 bit SoC and will bring significant performance enhancements on the floor despite several issues it has been rumored to be facing. The Snapdragon 810 will be supplemented by 3 GB of RAM on the device. The HTC One M9 will also come running Android 5.0 out of the box, and as anticipated below, the rear camera has finally seen an upgrade to 20 MP, with the front camera having a resolution of 4 MP. Other specifications listed for the device on the site include a 5 inch screen with a resolution of 1920 x 1080, which is, once again, something that has been rumored before as well. With the price of the One M9 also being leaked today, it makes us wonder what's left for HTC to announce at the MWC today. We'll find out in just a couple of hours, so stay tuned.