- Android 6.0 Marshmallow to be available next week - focus on battery improvements

Serving up Marshmallow sweetness real soon. Android 6.0 to start hitting HTC before the end of the year: pic.twitter.com/axITsYSyn9

As with all the Android releases, there is a small warning asterisk letting us know that "not all carriers in all regions will have completed the roll out before the end of 2015." While these two are the past two flagship devices from HTC, it still takes carriers quite a lot of time to roll out latest Android updates. Mackenzie promises "serving up Marshmallow sweetness real soon," but we can't be sure just how soon that will be. 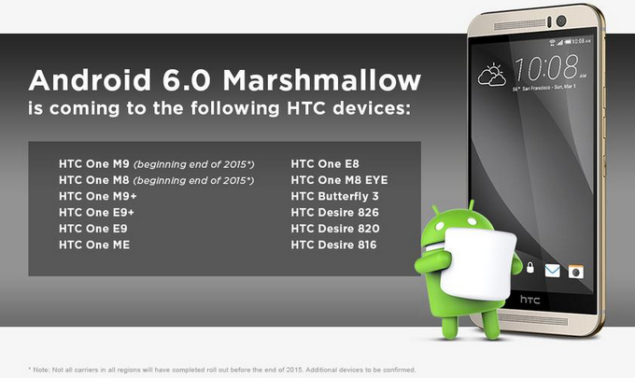 HTC One A9 is also expected to be announced on October 20th, probably carrying Android 6.0 Marshmallow out of the box. We will be updating you about the Android 6 rollout strategy for more devices as they are revealed.

Android 6.0 Marshmallow offers improved battery and charging enhancements with a new Doze mode, granular app permissions, deeply integrated fingerprint sensor capabilities, Google Now on Tap, and much more. While not a major update in terms of design, Google has certainly tried to refine the Android experience with more focus on under-the-hood optimizations.