Hover : Revolt of Gamers is a singleplayer & multiplayer arcade free run / parkour game that takes place in a futuristic alien city. The city is under pressure because of the Great Manager who decided to ban video games and condemn all people having fun. 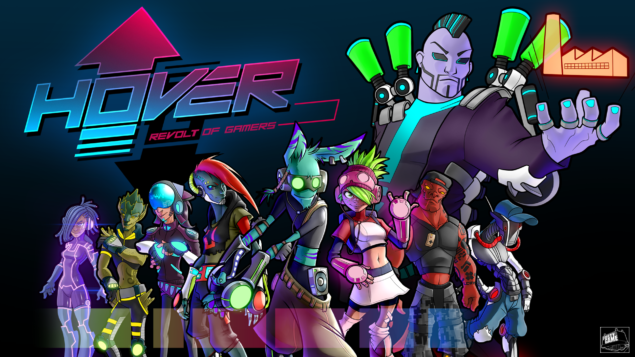 Created and developed by 3 young independent developers, "Hover: Revolt of Gamers" is a futuristic 3D parkour game in an openworld. Halfway between the crazy universe from Jet Set Radio, the interactivity of Mirror's Edge and inspired by movies like the 5th Element or Star Wars ; "Hover: Revolt of Gamers" takes place in another world where you're in charge of a band of Gamers revolting against anti-video-games laws oppressing the city.

You'll have to free the citizen restrained by authorities, localise and then infiltrate anti video games propaganda control centers, retrieve gaming consoles confiscated from the population to overthrow the new Mayor, who is the cause of this mess.

You can join your friends online at any time and progress throughout the adventure in their company, whether you are cooperating or working against them. Participate in races created in real-time by the community as well.
Wherever you are and what you are doing in the city, running around or in the middle of a mission, it'll be possible to connect to a server, instantly switching to multiplayer.

The current state of the Early Access version as detailed by the developer:

“- We set a tutorial to help you handle the controls (run, jump, grind, wall jump, handle, scan a switch to open a door or activate a mission, squat, carry a game ball and throw it on a target, rewind at a previous position)
- The map is a large and vertically height city,
- Many missions are already available (races, gameball matches, postman missions)
- A mission editor is available for the players that allow them to share their missions on-line.
- You can play as well on-line and off-line. there is no difference between these two modes except you can meet people in-game or not.
- Online missions are the same as offline ones but can be played with/against other people.
- There are 4 playable characters with swap color and height change possibility,
- They can improve their speed, jump, force, and energy with XP points earned with missions.
- Cameras will send you secuboxes after you when you are carrying a gameball to get it back, or will deploy holographic barriers to obstruct your way.
- 60 hidden gamegirls all around the city,
- Sabotage the Great Administrator's propaganda by deactivating the anti-video game holograms you will see in the city.
- The Gamer Resistance put some holographic items in the city. These items will above all guide the beginners to roam into the city and take some risks, offering some xp points.
- The scanner will help you to locate missions or players around you. It also indicates the cameras and the anti-video game holographic propaganda.
- You can also use the scanner to get information about the story of the city while scanning some elements (poster, environment objects, holograms...)”r. 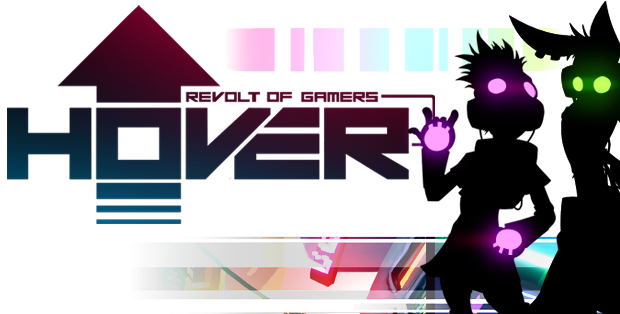 Jet Set Radio remains one of my favorite action games of all time, for its unique gameplay and visual style to as well as the futuristic neo Tokyo (or Tokyoto) vibe. Hover: Revolt of Gamers successfully captures the spirit of the game that inspired it, and adds a more contemporary feel.

Both Jet Set Radio and Jet Set Radio Future, featured an interesting story and some very nice areas to explore. Hover: Revolt of gamers hopefully imitates these two aspects that made the Sega classics such unique and appealing titles and manages to capture the current video game crowd.