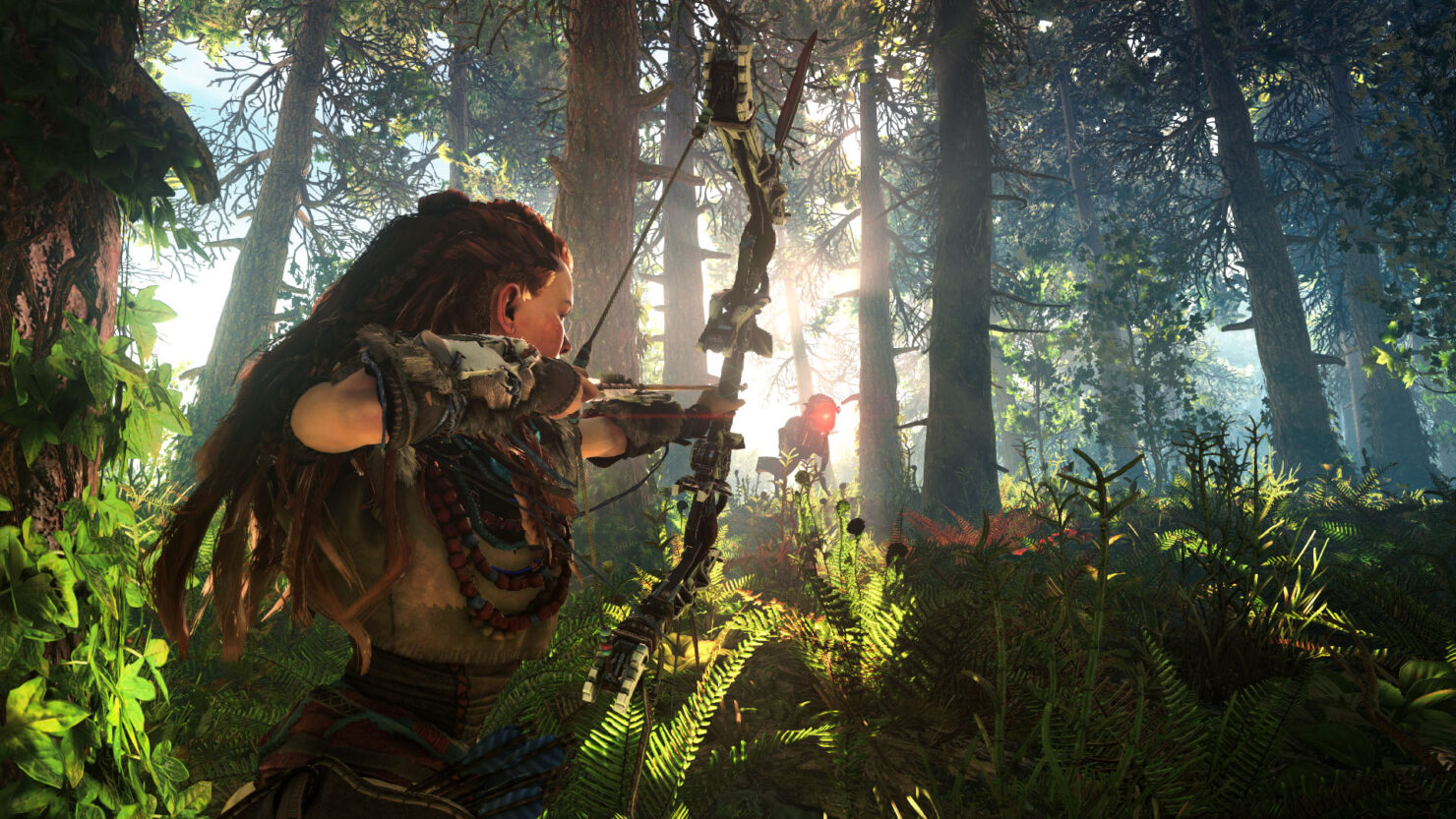 Guerrilla Games' open world action RPG Horizon: Zero Dawn has been showcased at several conventions in the last couple years, but only through video presentation.

For the first time, the developers made the game playable at Brasil Game Show and PAX West; as a result, we're just getting the first reports from those lucky attendees who were able to play Horizon: Zero Dawn's demo.

Neogaf's FelipeMGM spread his impressions over a series of posts, which we've condensed in the first quote. He also revealed the control scheme.

The demo starts with Aloy at a higher ground with a vista to some robotic creatures. There are watchers, the one used as a mount and also a shielded creature that kinda looks like a turret (?) on the fields, and also some natural wildlife like some rabbits and boars. The demo was basically an open area where you could fuck around for some time.

First of all, wow at the visuals and also the animations, both from Aloy and the creatures. They are not only good to look at, but also very fluid while playing. My biggest concern with Horizon was always the fear of having a janky gameplay as other open world RPG have, but I'm so relieved now. The bow and the spear are great and work as a nice combo for the combat. The focus ability is also a big part of it since the creatures have weak spots as we already seen. In a couple of minutes of combat I had already felt really comfortable with the mechanics.
Shooting an enemy from distance, then watching it rush at my position and then dashing away from its rush and then hitting with the melee spear felt so good.

Stealth gameplay was also good, but sometimes AI felt a bit dumb by not seeing me, but that happens in most games. A big thumbs up for the AI was when I took control of the mount and then watchers came and attacked it, the AI vs AI encounters were awesome to see, again thanks to the great animations.

The mounting felt great, but when going too fast I did notice some texture popping. Also, the game has a climbing system that reminded me a lot of Uncharted climbing.

One thing I think is a safe bet though is that crafting has a big part in this game since there are resources all around the scenario and creatures.

The area is not so big, it had a river, some bridges an old house. It felt alive because of the creatures and wildlife but was short of many interesting exploring focused places, but again, it's clearly a demo focused on combat and movement, not exploration.

Bow and arrow were L2 and R2 with L1 for the weapom weel, melee was R1, circle was the dash jump, square was crouch/stealth and d pad you had items like for example health stuff was D-pad up.

The game just felt and looked really good and more than ever I feel like Sony and Guerrilla have a big hitter on their hands with Horizon.

Another Neogaf user, Cubas, then chimed in with a brief post and confirmed Felipe's very positive report.

Also played it today at BGS.

I agree with Felipe. The visuals are great and the gameplay is pretty good. The only reason I'm not fully convinced yet is that the demo was simply a sandbox. No quests, no story.

Don't get me wrong, the mechanics are good, but not good enough to make the game worth playing if the quests are shit.

Played it at Pax. The theatre presentation was the exact same as the e3 demo, although the interaction with the demon guy felt a little less stilted for some reason

Hands on was a section where we were hunting a bunch of animals. Felt great, shooting a boar in the leg would cause it to stumble. At one point the boarstraight jumped over a giant rock while I had to go around. So pathing is great.

It sounds like the core gameplay has been nailed, at least judging from these early impressions. We'll have impressions of our own from EGX, where later this month the game will be playable.

Of course, the game's plot cannot be discerned by a brief demo and this very aspect has often been the thorn in Guerrilla's side in the past. However, the Dutch studio hired John Gonzalez for this specific reason: he is Lead Writer on Horizon: Zero Dawn and his credits are great, as he previously has been the Lead Writer on Fallout: New Vegas and MIddle-earth: Shadow of Mordor.