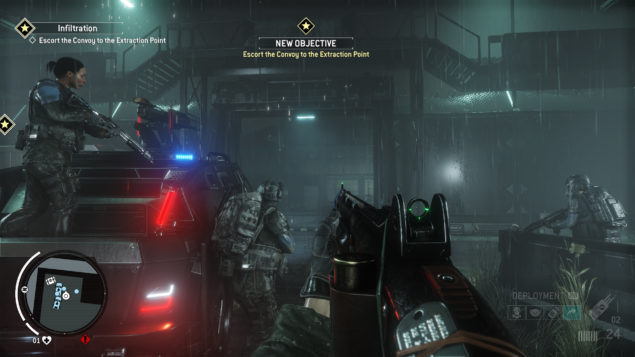 Homefront: The Revolution has been recently confirmed for a release in May 17 (North America) and May 20 elsewhere for all platforms, after rumors had indicated that same period.

A few hours ago, Deep Silver sent out a press release which, while focused on the co-op mode, also confirmed that the single player campaign will be "epic" and last "30+ hours" (which would be close to a record for a first person shooter like Homefront: The Revolution). Dambuster Studios' Game Director Hasit Zala said:

Homefront: The Revolution is this team's most ambitious project yet. In addition to our epic 30-plus hour single-player campaign, we expect to launch Resistance Mode with 12 Missions, packed with re-playability, and hope to release another 20 Missions within the first year. To ensure our community can always play together, all Resistance Mode Missions will be free to download.

According to the press release, this is what the so-called Resistance Mode entails:

Form a Resistance Cell with your friends online and wage guerrilla warfare against the KPA military in thrilling narrative-driven missions across occupied Philadelphia. Customize your personal roster of Freedom Fighters as you and your teammates go from rookie civilians to battle hardened soldiers. Unlock new skills, earn weapon blueprints, rare equipment and combat gear to upgrade.

There will be an exclusive beta for Xbox One running from February 11 to 14, while stress tests may take place on January 29 and February 5. Spots will be limited, with access granted only via tokens set to be distributed on Xbox.com and the official website of the game.

There's a bunch of screenshots and a trailer from the Resistance Mode of this CRYENGINE powered FPS, which we have embedded below. Homefront: The Revolution is being developed by Dambuster Studios, formerly Crytek UK, for PC/PlayStation4/Xbox One; you can check more information on the game in our exclusive interview with Senior Narrative Designer CJ Kershner.