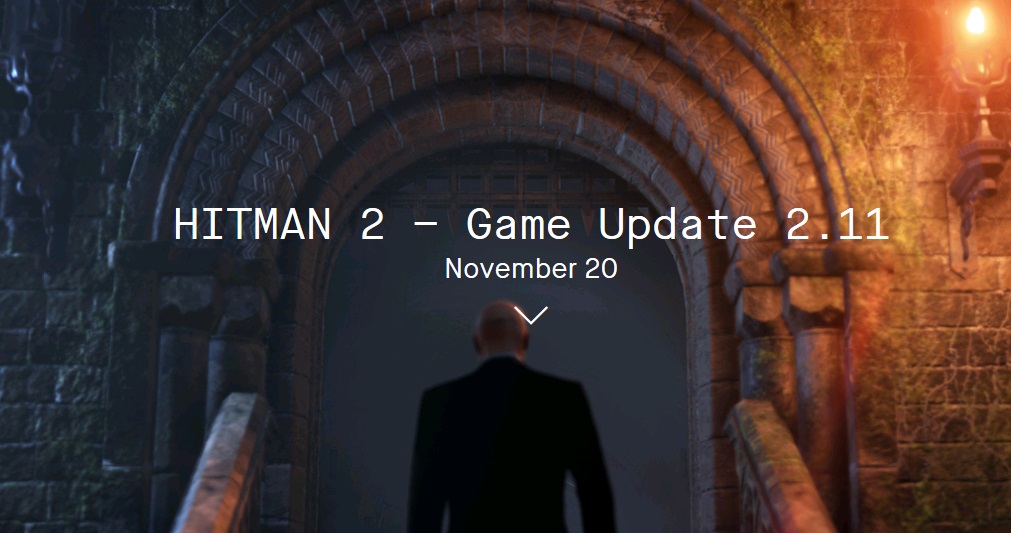 Hitman 2 update 2.11 has been released by IO Interactive, which includes overall game improvements, the first elusive target, and PC-specific fixes including a Phenom CPU and HDR fix.

The update is available for all platforms and clocks in roughly 1.2GB on PC and PlayStation 4, while the Xbox patch is 400MB in size.

“The 2.11 update addresses multiple issues that have been reported by our community in the first week of release”, IO Interactive writes. “We’ve also included a ton of improvements that didn’t quite make it into the game for launch.”

Alongside the game’s first elusive target and numerous fixes, the patch addresses an issue for those using an AMD Phenom CPU which prevented them from loading a mission. In addition, the update allows the game to played in HDR in exclusive fullscreen. We’ve included the official release notes below:

Overall Game Improvements
We’ve made hundreds of improvements, fixes and tweaks to the entire game across all disciplines. These improvements will greatly improve the experience of playing HITMAN 2.

Floating Targets
Alma and Sean 2 will no longer float in their bed in Hawke’s Bay.

Press X to…
We’ve fixed an issue where multiple, overlapping prompts could appear on an NPC depending on what 47 was carrying.

Difficulty HUD Default
The ‘Difficulty HUD’ option will now be defaulted to OFF. It can be toggled to ON in the Gameplay Options.

Clip Out
We’ve fixed multiple issues across the game where 47 could get stuck in cover, clip into cover, NPC’s get stuck in doors and other related issues.

Water Improvements
We’ve improved the fidelity of some of the water in Santa Fortuna, so it now moves more realistically and includes foam. We’ve also tweaked the water you can see on the horizon in some levels to look more realistic.

Objective Icons
We’ve tweaked the icons for objectives so that they accurately show what you’re supposed to do. For example, the ‘Locate Exit’ objective will no longer be displayed with a ‘target kill’ icon.

Escalation Situation
We’ve fixed an issue that could prevent the ‘Silent Escalation’ Challenge from completing, despite players completing the requirements.

Briefcase Blending
We’ve fixed a visual issue that would occur when Agent 47 would start a mission in a blend-in pose and hold the briefcase. He’s probably just happy that it’s back again and doesn’t want to let it go. Either way, the briefcase will now start next to 47, rather than in his hands.

Out of This World
We’ve fixed various issues where players could get ‘out of world’ or (leave the playable space) or see out of world by moving the camera in certain ways in certain players.

Camera Crasher
We’ve made a change to the destruction of security cameras, where they can no longer be destroyed by a thrown heavy item.

Considerate Assassin
We’ve fixed an issue where the ICA Tripwire Mine would behave erratically if placed in an Agency Pickup. Essentially, the mine would be activated before 47 could pick it up and it would kill him if he tried.

Long Way to Go
We’ve fixed an issue where the target in Hawke’s Bay would not report a found weapon to the closest guard. Now she does.

Trophies / Achievements Polish
We’ve taken the Opportunity to ensure Mission Stories are accurately described in our trophies / achievements. We’ve updated some of the artwork too.

Ghost Mode Communication
We’ve made various improvements to the communication around Ghost Mode, including an addition that occurs if you get disconnected from your opponent during a match where we now let you know that was why the matched ended. We’ve also made sure that all suits will display on the end-match screen.

Boot Flow
Although we recommend that you watch them, we’ve made it possible to get into the game faster by skipping the videos in the boot flow. We have also made minor adjustments to the Privacy Policy that is shown when launching the game, to clarify which sections are relevant for playing the game. The full policy can still be viewed on our website.

The Source Search
We’ve added The Source mission to the Contracts Search options. It should have always been there.

UI_Contract_Desc
We’ve fixed an issue that could cause a mission description to appear in coded text.

NAT Today
The Lobby screens for Ghost Mode and Sniper Assassin will now display NAT Type information for players with a Type 2 or 3 connection.

Find 47
The in-game Notebook Map now auto-centres on 47 everytime it is opened. Previously, it could retain the previous position and make it difficult to find your location.

Infinite Training
We’ve fixed an issue that could cause infinite loading in the ICA Facility if a player skips an exit cinematic at a specific time.

LOC down
We’ve fixed an issue with the challenge descriptions not matching their image for users playing in Italian, German, Brasilian and Japanese.

Rooftop Guard
That guard in Colorado who could end up on the rooftop of the mansion has been asked to come down. He complied.

Trespassing Makeover
We’ve fixed an issue that could cause 47 to be trespassing while following the doctor during the ‘Makeover’ Mission Story.

Bullet Decals
We’ve fixed an issue that could cause graphical corruption when shooting in the same place multiples times, especially on wooden surfaces.

PC optimizations
We’ve fixed an issue that could cause frame rate drops and sound distortion on machines with a low number of CPU cores.

Simulation Quality
We’ve added an option under Graphics called ‘Simulation Quality’, which will improve the amount and fidelity of crowds, cloth, destruction and particles system, depending on your CPU. The visual content only applies to the main campaign missions in Miami and Mumbai. The Simulation Quality option also affects audio across all game content.

This setting has three options; Base (CPUs with 4 cores or fewer), Better (CPUs with 6 cores) and Best (CPUs with 8 cores or more).

Hotfix Reminder
We released a hotfix for PC last week that fixed the below two issues:

HDR Fix
We’ve made a change to our HDR setup on PC. It is now possible to play HITMAN 2 in HDR in Exclusive Fullscreen. For this to work, it is necessary to disable the ‘HDR and WCG’ option in Windows 10 under the ‘Display’ menu. We’re continuing to work on and improve this feature in future updates.

Phenom CPU Fix
We’ve fixed an issue that could cause players with an AMD Phenom CPU to crash to desktop when launching a HITMAN 2 mission. This issue should no longer occur.

Hitman 2 is available now for PC, PlayStation 4 and Xbox One.