MediaTek's eager to make its name in the SoC world, with its greatly revamped product plan for this year. The company's MT6797 is the world's first deca core smartphone processor, that aims to improve performance efficiency through the introduction of an all new core cluster. Well, the company's Helio X10, which comes with eight Cortex A57 cores, that are guaranteed to provide you with some of the best performance around. Well, we've managed to get our hands on some Helio X10 benchmarks today, belonging to the upcoming Meizu MX5. 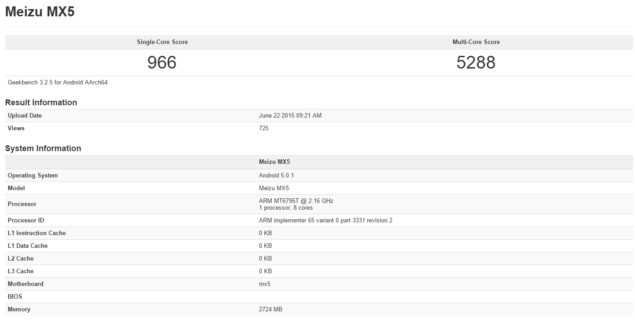 Meizu's MX5 is expected to be launched by the manufacturer later this month, and already the device has leaked, showing some impressive performance numbers. The device is the feature of not one, but three different Geekbench scores, that show the performance of MediaTek's Octa Core Cortex A57 offering. Taking a look at the image above, and subsequent images shows that the Helio X10 is an impressive offering, when it come to straight octa core performance. The device manages to score 5288 in one test, and 5153 in another (seen below) for multi core tests.

Single core tests for the MX5 don't pan out that well, with the device achieving scores of 966 and 985 respectively. Looks like MediaTek has some working to do in its single core performance segment. The Meizu MX5 will be launched by the manufacturer next week and is expected to come with a 5.5 inch screen, with a resolution of 1080 x 1920. This will be complemented by 3 GB RAM and 12 GB of internal storage on the device. Rear camera resolution is expected to hit an impressive 19 MP, with the front camera maxing out at 5 MP. Sounds to be quite a decent offering indeed. We'll find out more next week. Stay tuned and let us know what you think in the comments section below.