Since Haswell Refresh officially launched a few days ago, the time is ripe for a good old fashioned All Stars Showdown. This particular benchmarks are courtesy of Dr. Lee at udteam.tistory.com and consist of the entire Haswell Refresh and Ivy Bridge-E series pit against themselves and AMD counterparts. Without any further ado, lets dig in.

The benchmarks range from synthetic benchmarks to various gaming scenarios. You can find the detailed breakdown at Dr. Lee's page here. Keeping in mind the average gamer we have chosen the 1080p Benchmarks to post here today (lower resolution = too cpu Dependant, high resolution = too gpu Dependant) for a nice balance between the CPU and GPU bound scenario. The exact specifications varied a little but the graphic card used was the GTX 780 Ti in all tests, to keep the graphics portion of each rig the same. Every possible attempt was made to maximize the current compute configuration. Here is the aggregate benchmark: 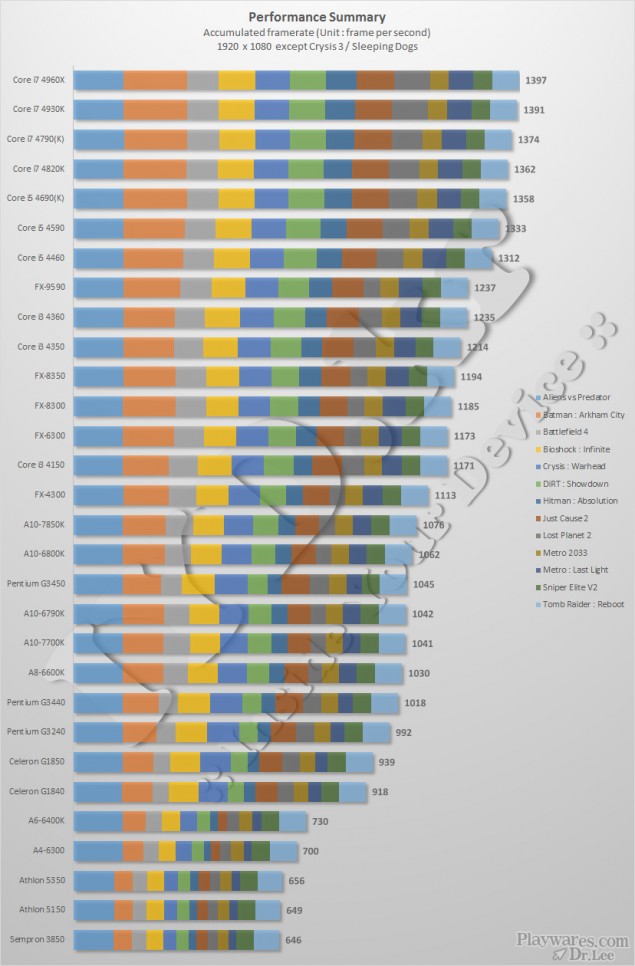 The benchmarks don't really reveal anything surprising, as always, the more you pay, the more performance you get. Ivy Bridge-E is the clear winner, though ofcourse the increase is diminishing in nature compared to the bucks you are going to spend. AMD's highest offering is 137 points behind the Intel Haswell Refresh counterpart and that once again is nothing surprising. AMD's compute is in shambles and even red itself knows it although performance itself doesn't tell the whole story. I am sure if someone would care to make a Price/Performance graph from this aggregated benchmark the results would be widely different. That said, these Haswell Refresh processors did remarkably well: Intel i5 4590, i5 4690k and the i7 4790k give very decent performance. For the average gamer going for a good Haswell Refresh processor, the list starts with the i5-4590. Games don't really benefit from an i7 but if you are going the i7 way, then there is no point going for the i7-4820k rather go for the i7-4790k. Finally here are the benchmarks from Crysis 3, Battlefield 4 and 3dMark 11 for your viewing pleasure.

What is the best #Intel Haswell Refresh CPU for gaming? here are the benchmarks. http://t.co/YeaebuvUYS