Hard Reset, the first person shooter developed by Flying Wild Hog, has been released a while back on PC and it seems like the game will also be made available on PlayStation 4 and Xbox One in the near future. In fact, the game has been recently rated for consoles in Europe. 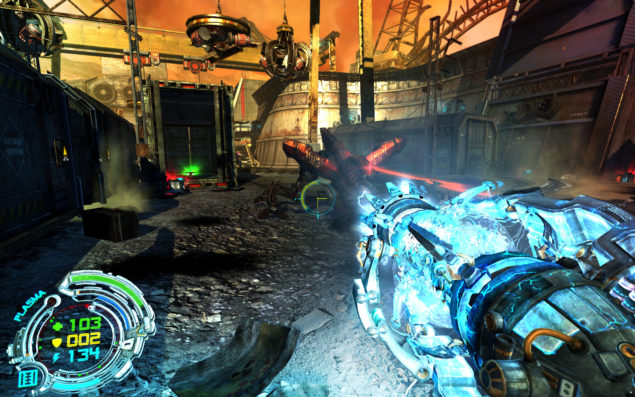 More precisely, Hard Reset: Redux has been recently rated by the German ratings board (the USK) for PlayStation 4 and Xbox One, obviously receiving a 18 rating due to its gore. The USK website doesn't say much else at the moment, so there's very little we currently know about the console version of the shooter by Flying Wild Hog.

Even though there are plenty of high quality first person shooters available on the market, Hard Reset managed to set itself apart from the competition with its old-school inspired experience. If you have enjoyed classic first person games such as Duke Nukem 3D, Quake II and others, there's a good chance that Hard Reset is the game for you.

The world as we know it ceased to exist. Humanity is at the verge of extinction, living in the last closed city of Bezoar. Mankind wages war against the machines controlling vast areas of what became the 'Barrens'. Machines want to control and assimilate 'The Sanctuary' a network that holds billions of digitalized human minds. Our hero, Maj. Fletcher, is a soldier of CLN - a corporation combat unit, established to protect the city. Machines are constantly assaulting the walls of Bezoar. Fletcher moves in when Bezoar's protective barrier is breached.

Back when the game was released, many have complained about a variety of issues such as short length, performance issues and more. Most of these problems have since been fixed, so the PlayStation 4 and Xbox One release will definitely do better than the PC version at launch.

Hard Reset: Redux has been recently rated for PlayStation 4 and Xbox One but very little is known about the game right now. The Extended version of the game, which includes the Exile DLC pack, is now available for a very low price on Steam.