Halo 5: Guardians is undoubtedly one of most substantial exclusive video game titles releasing this year, and it looks like 343 Industries is all set to inaugurate the legendary first-person shooter series on Microsoft’s eighth generation Xbox One console in a proper way. The upcoming game comes as a sequel to Halo 4, and allows players to experience the rich Halo universe. It features the "most ambitious campaign and multiplayer experience in franchise’s history", all running at smooth 60 frames per second. Here are some new in-game screenshots for you to feast your eyes upon. 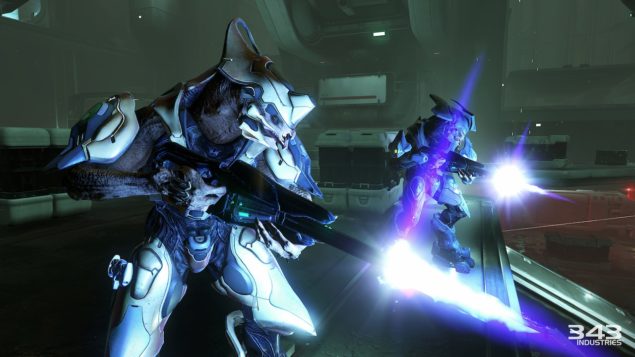 We’re actively moving towards the end of the year, but there is still a lot to look forward to in terms of major game releases taking place before the year ends. As one of the biggest flagship properties for Microsoft, Halo has always been Xbox fans’ favorite franchise. After releasing Halo: The Master Chief Collection on Xbox One, Microsoft now turns towards its eager fans with Halo 5: Guardians, the most anticipated and highly awaited main installment in the company’s most prized multi-billion dollar franchise.

The game is not more than a couple of months away, and to keep the hype train going, 343 has just released some brand new screenshots showcasing the Blue Team campaign mission that has already been shown off a number of times before, however, these screenshots are fresh, and have been taken from new angles. That is not all, a new footage on GameSpot’s YouTube channel shows off the well-known Slayer Mode for the game’s Multiplayer campaign. You can check out the screenshots and the footage below.

Halo 5: Guardians is set to launch on October 27 exclusively for Xbox One console. It has been confirmed that unlike previous Halo titles, the upcoming game will not feature the famed local splitscreen for campaign co-op or multiplayer, this means you won’t be able to play the campaign with a friend. It is obviously a bummer. However, the new content and modes that are being introduced seem quite appealing.