I have here with me the official gaming performance comparison of the 980 Ti (), along with a very nice selection of assorted benchmarks. The benchmarks are courtesy of Zol.Com.Cn from a review which has been published early (no, really). So without any further ado, here is today's scrumptious leak about the Nvidia Geforce GTX 980 Ti.

Given below is the official gaming performance of the Nvidia GTX 980 Ti. I was tempted to watermark this image, considering the amount of pubs that have taken to poaching our news, but you know what - that's not good form. Customary to Nvidia style, the card has been compared to the previous generation non-TITAN class flagships. The Geforce GTX 780 Ti and Geforce GTX 680 make an appearance. As we can see, there is quite a difference between the 980 Ti and the previous generation flagships. Infact, the 980 Ti is the first card to pass the 30 fps minimum standard on the brutal Crysis 3 at a not so brutal resolution of 2560x1600. A fair majority of the games it is able to run at the golden 60 frames per second standard. Ofcourse, 4K resolution is all the hue and cry nowadays so lets move on to those. 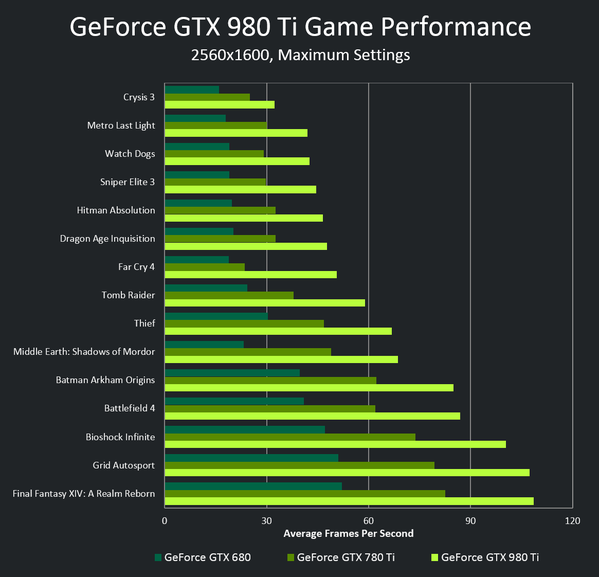 While we don't have official 4K benchmarks of the GPU, we have the next best thing. Given below are 3 assorted benchmarks of the GTX 980 Ti running two power hungry titles and the popular 3DMark benchmark at 4K resolution. Its worth noting that no card at the moment can singlehandedly score a 30fps+ frame rate on Crysis 3 at 4K. Everything considered, a score of 20fps is pretty decent. It means that you can SLI the GTX 980 Ti, to get an assured 30fps+ frame-rate experience in just about every game you can think of - at 4K. The GM200-310-A1 powered graphic card scores 3719 points compared to the GTX TITAN X which scores 4119. It nets around 1 frame less than the TITAN X in Crysis 3 and GTA V at 4K.

Finally we have alot of assorted benchmarks, also courtesy of the folks over at Zol.com.cn, putting the 980 Ti through its paces albeit on the now-modest 1080p and 1440p resolution standards. It is worth pointing out that the GTX 980 Ti has 96 ROPs just like the TITAN X - so you are getting amazing bang for the buck. The card's expected MSRP is $649 (with tax adjusted pricing upto $799 in some regions of the world) which is an impressive deal for the graphical horsepower you are getting. The card goes toe to toe with the TITAN-X in some cases and that is a 1 Grand GPU.