Disclaimer: Wait! STOP! Before you attempt to read this further, make sure to take everything at face value alone. Though we have run every authenticity check we could think off, it does not mean that this News can be basis for further assumptions.  I cannot possibly stress the importance of not blindly following a distant leak source no matter how authentic it appears. The only reason i have not tagged this post as a RUMOR is because i have yet to find any sign of forgery or fabrication. Massive Skepticism, Brain, Jar of Salt. Ok, you are good to go.

Update: I have talked with Nvidia PR and it appears that this problem is limited to Galaxy GTX 780 Tis in a certain region in  a certain batch, due to an illegal change in the reference design. "Not true. Galaxy made an unauthorized change to the reference design that affected 55 of their cards. Nobody else affected." - Nvidia PR Bryan Del Rizzo

We have just received tips from some of our Chinese readers that the Nvidia Flagship GTX 780 Ti ran into problems in the Chinese locale, causing GPU Deaths,  allegedly, one actually blew up. The sources they have given us (given below) also have alleged evidence of Chinese suppliers suspending GTX 780 Ti Sales in their specific areas. The alleged poster is in Chinese and appears to be saying the same. The Chinese supplier in the poster is 'Centralfield'.

In a shocking email a Chinese Reader told us that GTX 780 Ti units in the Chinese locale are hitting a snag. One of them even apparently blew up. He further directed us to alleged evidence that the GTX 780 Ti was being recalled and its sale suspended.  The posters are in Chinese. 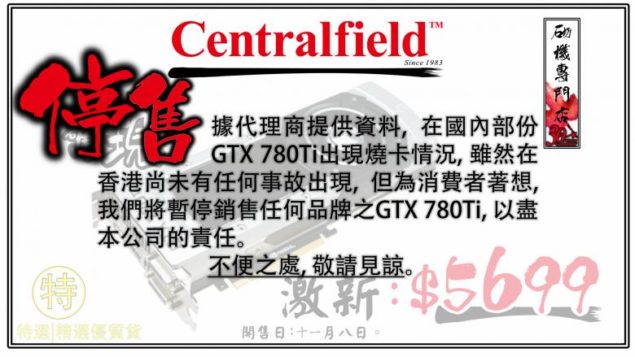 According to our Chinese friend this says something along the lines of dead/burnt GPU and GTX 780 Ti sales suspended.

Further more the same Chinese source also claims that Galaxy has acknowledged the malfunctioning batch and is recalling said batch and promising replacements. If this is indeed true then this could be quite a snag in the Nvidia Sales department. The alleged batch of malfunctioning products is also given. 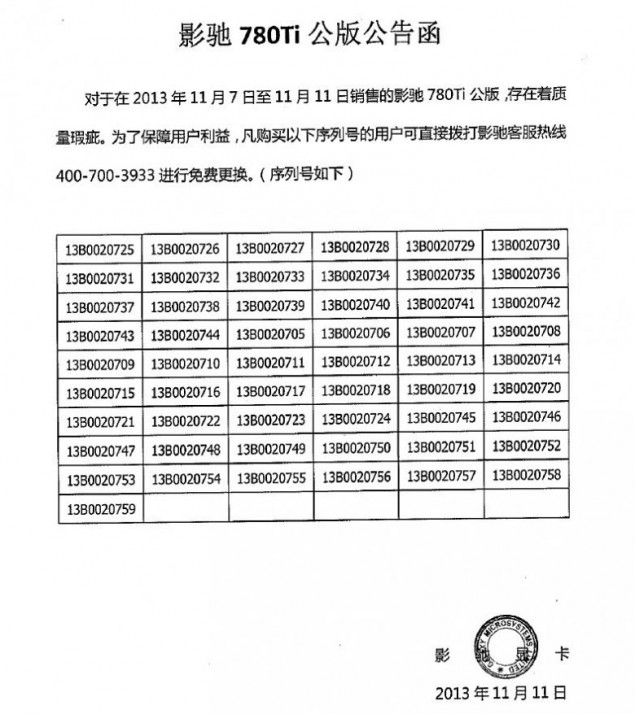 We honestly aren't sure how to proceed, things like this are pretty serious business. That said i am not going to present any form of further analysis. Doing so would violate the sanctity of our aim to providing you with authenticated and responsible news. Feel free to analyze everything as it is yourself.

Getting reports that GTX 780 Ti is allegedly being recalled in China :/ Something about stuff blowing up #lol http://t.co/UmWyKSDemI