Well we dont have three GTX 780 Ti's lying around but it seems our friends over at Chiphell do. They have also conveniently  ran the 3d Mark 11 Benchmark with impressive results.

The test setup of the Dual SLI was the following:

The test setup of the Tri-Sli was the following: 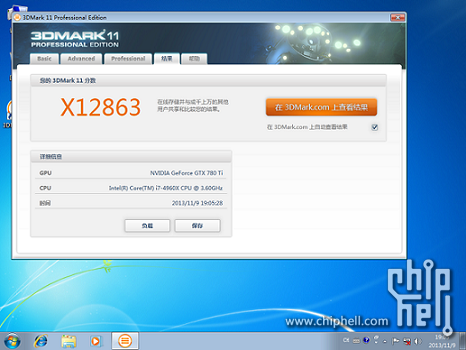 So these were the test benchmarks of the Dual SLI and Triple SLI GTX 780 Ti Respectively. We can see that there are scaling problems in the three was sli. If we take an average result of a singe GTX 780 Ti to be 5200 then the Dual SLI is approximately 87- 90% Efficient, which is an acceptable rate i might add.

The Tiple SLI on the other hand is only 79-82% Efficient and this with a 4960X and SSD! It is now touching the lower limits of acceptable scaling. It appears that as usual Optimum scaling ends with a Dual SLI. The Predicted bench of the Tri SLI should have been around 15 600. But as we can see its only 12 863. Not to mention it requires one hell of a setup to give even that. The SLI problems could also be the result of the memory bandwidth of course; though the actual memory isn't utilized that much in 3d Mark 11, so that is not a primary factor.