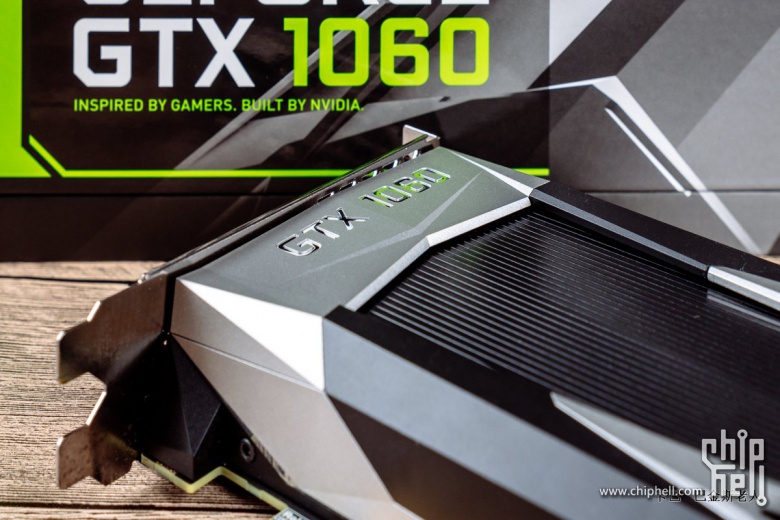 Some more close up shots of the upcoming GTX 1060 graphics card have leaked out on ChipHell. Featuring the Pascal based GP106 core, the budget GPU will be going head to head against the RX 480 and will be supporting a similar price tag. Based on the 16nm FinFET process the card is expected to hit the shelves this month. The preliminary performance reports put it ahead of the RX 480 albeit with 2 GB less vRAM.

According to the official press material, the card is expected to have 6GB of GDDR5 memory clocked at 8 Gbps. The card will only use a single 6-pin connector and will have a power draw of 120W. It will be using a GP106 core with 1280 CUDA cores and 1.7 Ghz boost clock (the base clock is currently not confirmed). The design follows the same 'order of 10' aesthetic that Nvidia has used for the GTX 1080 and GTX 1070 with a slight deviation in the styling of this particular card. The card will feature 3 Display Ports, 1 DVI-D and 1 HDMI 2.0. The PCB itself is pretty small in size, with the shroud of the card extending ahead of the PCB.

Pictured below are images of the founder's edition courtesy of ChipHell:

This card is going to be the cheapest VR-Ready graphics card from Nvidia and has been positioned explicitly against the RX 480. Which is why, even though we do not know what the MSRP will be, it should be somewhere around the $250 mark. The 8GB variant of the RX 480 costs $239 so keeping in mind Nvidia's past pricing policies, the $250 mark will be a heavily contested one. The RX 480 has run into some initial bad press regarding an over-the-line power draw on the mobo side of things but AMD has already released a fix for the same. That said, while Nvidia offers higher raw performance for VR, the RX 480 will offer a higher vRAM count.

Both GPUs are exceptionally good graphics cards built on the FinFET technology and should open up a completely new era for gamers. This particular price point in the spectrum of graphics cards was usually dubbed as "budget" but make no mistake this time - both the RX 480 and GTX 1060 graphics cards are exceptionally powerful GPUs with a very strong value proposal. As far as bringing down the cost of VR is concerned, both offerings successfully lower the price by almost half. The next thing that must come down for VR to go mainstream is of course, the price of the HMD. Both Oculu and HTC Vive are currently supporting price tags upwards of the $700 mark - or in other words, out of the budget of most gamers.

The GeForce GTX 1060 performance results were also leaked (covered over here)and show some really interesting figures. In 3DMark Firestrike Ultra, the GeForce GTX 1060 scores 3014 points while the Radeon RX 480 was scoring around 2600-2800 points. That is a 7-8% increase over the RX 480. The GeForce GTX 1060 also scores 11225 points in Firestrike Performance while the Radeon RX 480 was scoring 10500 – 10600 points in several 3DMark entries on reference clocks. It should be pointed that the benchmarks were tested without official drivers as NVIDIA has yet to ship GTX 1060 drivers to reviewers.