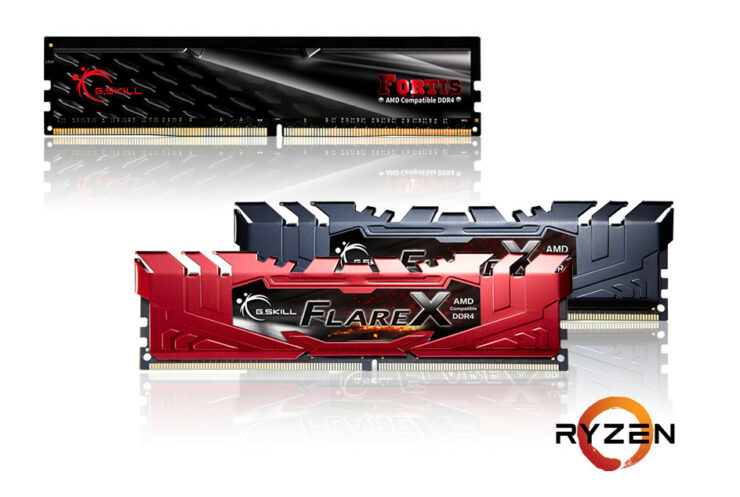 G.SKILL has introduced two new series of DDR4 memory that will be catered for AMD’s Ryzen processor platform. The manufacturer is a pioneer when it comes enthusiast-grade memory and the latest family are dedicated towards different consumers depending on their requirements.

G.SKILL FORTIS Series of DDR4 Memory Caters to Gamers in a Cost-Effective Manner – Flare X Will Be Available in a Variety of Frequencies and Cater to Enthusiasts

The new Flare X series and FORTIS series have been designed and tested specifically for the new AMD Ryzen processor platform. Since these new processors feature a new architecture and of course a new chipset (newer platform will use the AM4 socket) from AMD, G.SKILL must have vigorously tested its memory kits prior to announcing them so that not only are they able to provide compatibility with the new platform but also exhibit stability under stock frequencies and timings and overclocked settings.

Coming to the Flare X series DDR4 memory kits, these RAM kits are expected to deliver the very best in overclocking performance when you have decided the components you want to use for your AMD Ryzen enthusiast build. As for the FORTIS series of memory, these RAM kits are catered to users who are aggressively pursuing a pairing of cost-effective parts where they can get the most out of their system without shelling too many funds on that overall build. According to the screenshots courtesy of techPowerUp, G.SKILL managed to achieve a stable overlock on a 64GB (4 x 16GB) RAM kit at DDR4-3200MHz and that too at timings of CL14-14-14-34.

In case you were wondering when these RAM kits will be available for the public, G.SKILL’s worldwide distribution partners will have them starting from March 2017. Unfortunately, pricing details were not provided for now.