The latest numbers from the GPU market have been shared and posted by Jon Peddie Research which shows that the market grew 9% in Q3 2016, compared to the last quarter. The graphics market Jon Peddie Research covers, includes AIBs which come with discrete GPUs which are used across the market in PCs (Desktop, note books, workstation, servers, etc). 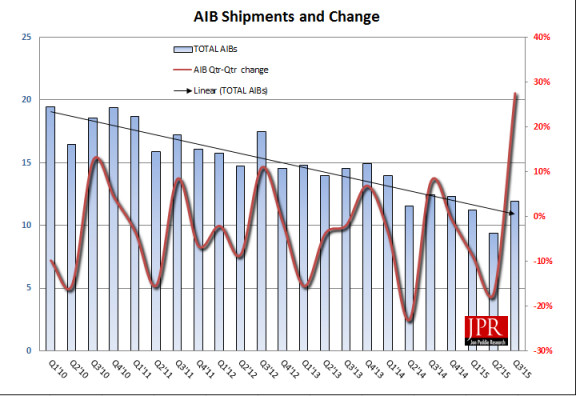 According to the report, the highlight of the market was the increased unit shipments from both AMD and NVIDIA. The graphics market is doing plenty great in the third quarter as gamers get ready for the latest AAA titles launching in the holiday season such as the most recent Fallout 4 from Bethesda and Star Wars: Battle front from Electronic Arts. These games are spicing up the scene on the PC. NVIDIA has a strong Maxwell line up which has gained them a huge market share since early 2015 while AMD saw increased market share in the third quarter with their latest Fury series which includes the Radeon R9 Fury and the Radeon R9 Nano. The PC Gaming market has also been the reason of increased discrete GPU shipments  in Q3 2015 from both NVIDIA and AMD.

AMD in general performed really well in Q3 2015 with a discrete desktop GPU shipments standing at 33% which is the highest shipment rate in the market for the quarter. This points out that the Radeon Fury and Radeon 300 series lineup has brought in several gamers on the red team as AMD readies itself for holiday season's blockbuster titles and pump up the game with DirectX 12 readiness moving into 2016. The desktop APU shipments also increase by 15.0% (Kaveri/Richland Lineup) while decreasing 1.0% in the notebook sector. APUs technically feature a discrete level graphics core inside their die which means they also amount to the overall discrete graphics shipment for AMD. The AMD discrete GPU shipments for the notebook market saw a 17.6% increase which is pretty good considering they still rely on older cores that are bound for refresh in 2016.

Coming to NVIDIA, the graphics giant also saw an increased discrete GPU market share of 26.35% on the desktop front as more and more users upgrade to the Maxwell lineup. The company's notebook market share for discrete GPUs increased by 14.1% and the overall graphics shipment increased 21.4% from last quarter compared to AMD's 15.9% increased. When comparing the discrete market share for AMD and NVIDIA, the green team saw a small market share decline which now stands at 81.1% compared to 81.9% in the previous quarter. AMD on the other hand gained a small fraction of share which now stands at 18.8% from 18.0% in the last quarter.

The main reason is AMD's strong HBM powered Fury lineup and its strong DirectX 12 support for upcoming AAA titles. NVIDIA on the other hand has not released a new Maxwell based cards aside the GTX 950 which arrived back in August. Maxwell cards have been in the market since September 2015 and users are now waiting for the next iteration of NVIDIA's GPU architecture codenamed Pascal which will arrive in 2016 with HBM2 memory architecture and increased graphics performance. AMD on the other hand has promised two new graphics chips based on their FinFET process and HBM memory architecture to be available in 2016 too which are bound to increase the market share of both companies respectively. The other two graphics supplier in the discrete market, Matrox and S3 amount to 0.00% market share which makes them completely irrelevant against AMD and NVIDIA.

Total discrete GPU (desktop and notebook) shipments from the last quarterincreased 21.86% and decreased -15.69% from last year. Sales of discrete GPUs fluctuate due to a variety of factors (timing, memory pricing, etc.), new product introductions, and the influence of integrated graphics. Overall, the CAGR from 2014 to 2017 is now -4%.

While NVIDIA and AMD are the two dominant discrete GPU suppliers for the PC market, Intel leads the entire GPU market with a share of 72.8% (down from 75.2% last quarter). The shipment of Intel GPUs amount for all GPUs shipped by them inside their processors found in desktop PCs, notebooks, servers, workstation, embedded and mobility chips. The GPU market for NVIDIA is the second largest with a share amounting to 15.7% (up from 14.1% last quarter) while AMD also saw an increased overall GPU market share of 11.5% (up from 10.7% last quarter). Both NVIDIA and AMD performed really well in Q3 2016 and it seems like things would shape up well as both companies transition in 2016 and launch new and more powerful GPU (discrete) offerings. 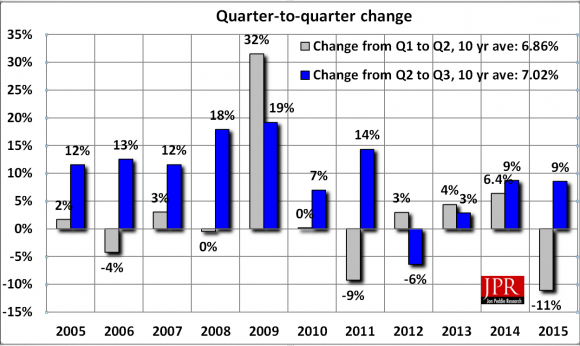