Google+ For iOS Updated With A New ‘Collections’ Feature

Usually, Google updates its apps on iOS first and then move it towards other platforms such as Android and the Web. However, when it came to the Collections feature in the Google+ app, Android users were the first to receive the update where iOS users were left out. Moreover, Android users have had this feature for a few months now. Finally, Google has considered updating the Google+ app with the Collections feature on iOS. The update arrived this morning on iOS and can be updated manually from the App Store. 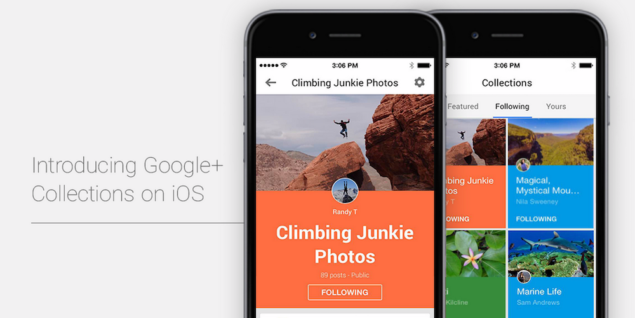 The Collections feature on Google+ is a distinct way of organizing your posts on the Google+ platform so your followers can view subjects that interest them. Before the update, users had to publish posts to different privacy levels, such as Public, Private or Circles. The Circle was a convenient option but with the arrival of Collections, sorting out subjects for audiences is facile.

Let's see the new Collection feature in Google Plus on iOS in a little more detail.

View What Interests You With Google+ Collections

The topic filter for your audience is a great tool to target relevant information. Google+ users can use the Collections feature for topics that interest them. Apart from this, users can also follow specific topic Collections sorted out by their followers. This way you can view certain types of information shared by that user that interests you, filtering the remaining posts that are not up to your taste.

The Google+'s Collections feature has been in the long wait for its iOS departure. The fact that it arrived gives us a great way to start using the feature. You don't have to do much to filter certain types of information. All you have to do is go to the profile of a person and tap on the Collections tab. In the Collection tab, follow or unfollow any topic you like. That's it. It's a great feature and we are glad that it has finally arrived for the iOS platform.

Many other websites have coined the notion that Google+ is dead. This is followed by the news that Google has continued to sway its Google+ requirements from other services. Even though Google+ integration with other services has been in an unstable position, it would not be wise to say that the platform is dead because a lot of active communities are still present.

This is it for now, share your thoughts in the comments.

You can Download Google+ app on the App Store for free.