Google Images to Display Captions Under Every Search Result on Mobile

Google Images has been under a lot of criticism lately for removing the direct link to images in their search results. The reason was cited to be a licensing deal, and the button has been missing ever since. One can still easily work around it, so we're not entirely sure what Google hoped to achieve with the move. The image result page wasn't broken per se, but some of the images lacked context.

To remedy it, Google began improving visual discovery by adding more context to the image results page. Elements such as badges, for recipe or product, helped users find what they were looking for. Google also began including the domain URL for every result to allow the user to view the image on the webpage it originated.

Today, Google pushed out an update to Google Images which provides even better visual discovery with more context on the image results page.  Essentially, it will help users in identifying objects by their characteristics. According to Google's blog post:

This extra piece of information gives you more context so you can easily find out what the image is about and whether the website would contain more relevant content for your needs.

In this example, the image results give you visual confirmation that you found the right fruit, but captions make results instantly more useful with additional context. For instance, you can learn that this fruit is called carambola or starfruit, and that it’s popular in China. This also helps you choose the result page to click and explore further. 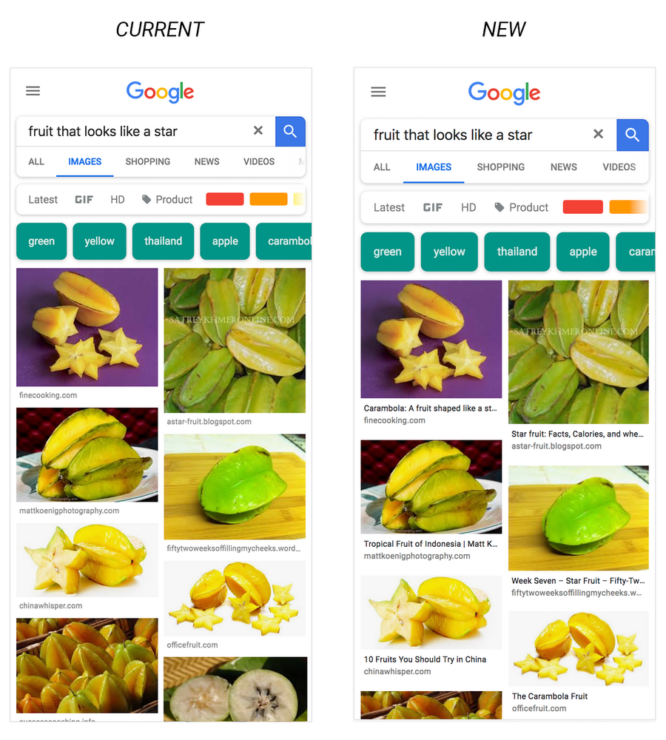 The newly added captions will appear just above the domain address in bold and feature the title of the web page where each image is published. The update is not a significant one by any means and will probably go unnoticed by most users. It will begin rolling out across all mobile devices (Android and iOS) beginning this week. There's no word about other devices just yet, but we'll keep an eye out for it. All things considered, we would appreciate it more if we got the direct link to images back.