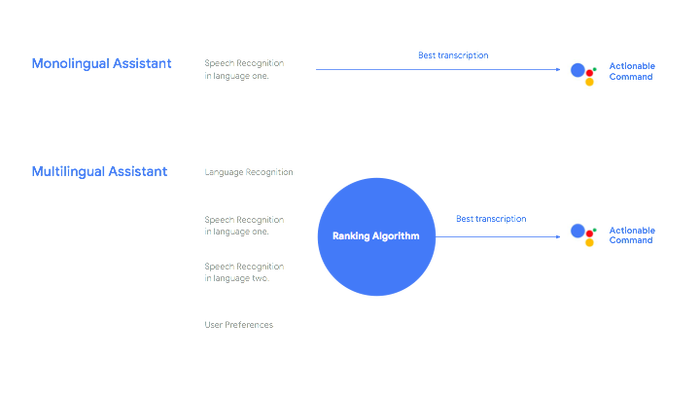 Google announced bilingual support for Assistant back in February and today; it’s beginning to roll out the functionality in six languages. Users can speak to Assistant in two default languages with phones and smart speakers able to understand and reply in either. At MWC 2018, Google framed the functionality as a way to help Assistant become a more international service with users able to essentially set two default languages, and bilingual support helps the growing number of multilingual households by making smart speakers accessible to everyone.

Technologically, telling one language apart from another is quite tricky. Google has developed LangID models capable of distinguishing “between pairs of languages in over 2000 alternative language pairs.” The next step is understanding multiple languages, with Assistant determining the language and what is being said by the time a user stops speaking which is accomplished with the help of an additional algorithm that ranks the transcription hypotheses provided by each of the two speech recognition systems using the probabilities of the candidate languages produced by LangID, our confidence on the transcription and the user’s preferences (such as favourite artists, for example).

Google shows the feature of helping young kids interact in whatever language is natural for them, as well as being used by those living abroad. Meanwhile, on phones, the feature can be leveraged by users who speak one language at work and another at home. Google also uses various tricks like switching to a single monolingual speech recognizer if the early identification of the word is possible. Contextual signals are also leveraged to arrive at a quick decision.

Users will have to set the two desired languages from Assistant settings. The functionality limited to six language pairs today which are English, German, French, Spanish, Italian, and Japanese. It is rolling out starting today with a new “Assistant languages” menu under Preferences in Assistant settings.