In a surprising move, semiconductor manufacturing company GlobalFoundries announced that it is going to start producing chips on the 14 nm process. Thanks to the efforts of the Samsung GlobalFoundries partnership, the latter was able to propel itself to new heights by announcing chips for the aforementioned process. Currently, Samsung’s Galaxy S6 and Galaxy S6 Edge are incorporated with the company’s 14 nm Exynos 7420 SoC, and we all know that it performs far better than Qualcomm’s Snapdragon 810. 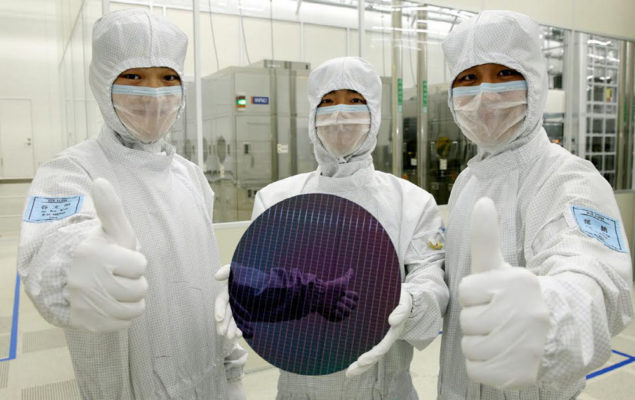 Samsung Being Overly Friendly With GlobalFoundries; Licensing Technology To The Firm

As we have reported four months ago Globalfoundries has promised to begin volume production of 14nm FinFET based chips in the first half of this year. In a statement published on thursday the 2nd of April by Mubadala, the investment arm of the Abu Dhabi government and the parent company of Globalfoundries reaffirmed its readiness to bring cutting edge chip manufacturing to customers this year. As the Globalfoundries Malta fab in New York begins ramping chip wafers for the company's customers.

GLOBALFOUNDRIES announced a strategic collaboration with Samsung to deliver capacity at 14 nanometer (nm), one of the industry’s most advanced nodes, as Fab 8 in Malta, New York began ramping production for customers.

Samsung has developed two 14nm FinFET manufacturing processes 14LPE and 14LPP. The second being better than the first in almost all regards. Performance, power consumption and yield. The 14LPE node only serves as a means to customers to bring 14nm FinFET chips early to market without having to wait an additional quarter for 14LPP. Globalfoundries has licensed both of these process nodes from Samsung. The first is already ramping and the second is expected to follow in the coming months. Additionally, the partnership will also put significant pressure on TSMC, which happens to be GlobalFoundries’ biggest pure play foundry rival.

Earlier, it was reported that Apple will be tapping Samsung instead of TSMC to start mass producing the Cupertino tech giant’s A9 SoCs. Now that the story has been confirmed, we can only imagine what TSMC’s executives will be contemplating.

Furthermore, it has also been suspected that Qualcomm’s Snapdragon 820 SoC is also going to be fabricated on the 14 nm node, which the leading mobile chipset maker can only receive if it forms an alliance with the South Korean smartphone giant Samsung.

More details concerning the partnership of Samsung and GlobalFoundries will be published as soon as it is available.