Gigabyte has unveiled their X99 SOC Force motherboard which is the second motherboard they have previewed this month and a part of their upcoming X99 product lineup. We got to see Gigabyte's X99 Gaming G1 WiFi board last week which is an enthusiast oriented gaming board while X99 SOC Force keeps things focused towards high-end overclockers with a variety of tools and features. 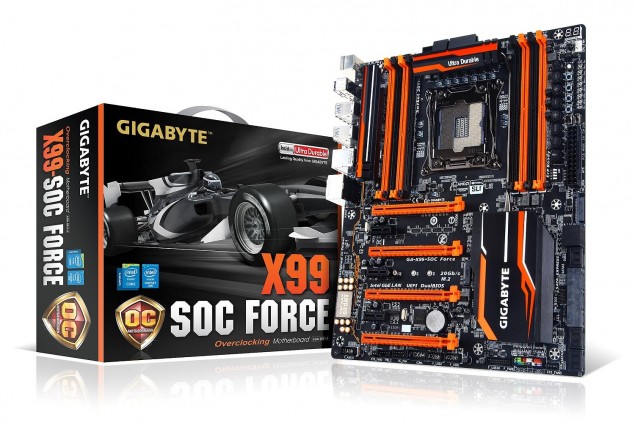 The Gigabyte X99 SOC Force is the flagship overclocking motherboard of Gigabyte's lineup featuring the ATX design form factor and keeping things geared up for the performance enthusiasts. It features the orange/black color scheme from previous iteration of SOC and OC branded products such as the recent, Gigabyte GA-Z97X-SOC Force motherboard. The Gigabyte X99 SOC Force motherboard features three sets of heatsinks, one fitted above the PWM section, one along side the power section near the I/O panel and the biggest chunk featured on the X99 Express PCH. The heatsinks are connected via a long heatpipe that dissipates heat for better thermal load management.

Gigabyte's X99 SOC Force motherboard features the LGA 2011-3 socket which will be able to support Intel's next generation Haswell-E processors with quad channel DDR4 memory controller. The Haswell-E lineup is launching on 29th August 2014 so you better start saving money for this bad boy if you want a piece of it since it'll not be retailing at the price of its mainstream-performance Z97 platform equivalent. The Z97 SOC Force retails at a price of $209.99 US so this could easily fall in the $300+ US range considering its design and features. It looks like the motherboard features a 6 Phase PWM design powered by a single 8-Pin EPS connector while the board itself is powered by a 24-Pin connector. The board makes use of Gigabyte's Ultra Durable design featuring high-quality components.

Gigabyte has featured their Ultra Durable design across their X99 motherboards which make use of the industry leading PowIRstage controllers from International Rectifier. These 100% digital controllers offer enhanced precision in delivering power to the motherboard’s power hungry and energy sensitive components. The PowerIR stage ICs used on the Gigabyte X99 SOC Force have the highest rating of 40A with lower losses, excellent thermal management and higher efficiency. The new DirectFET technology helps save motherboard space and less electrical leakage as compared to MCM packages (Multi-Chip Module). In addition to that, Gigabyte's X99 SOC Force is also the first HEDT motherboard to make use of the OC panel which is of great use to overclockers and offers several components along the side of the motherboard for easier management, some of the features of the OC panel include:

Eight DDR4 DIMM slots can be found along the sides of the socket which are able to support high-frequency DDR4 memory sticks. For storage, the X99 SOC Force features 9 SATA 6GBps ports and two SATA Express ports. There's a PEG power connector on the top of these SATA ports while a single USB 3.0 and two USB 2.0 ports rest beneath the PCH heatsink. Expansion slots include four PCI-e 3.0 x16 slots with full support for 4-Way SLI and CrossFireX Multi-GPU functionality. There's also three PCI-e 3.0 x1 slots and a single M.2 SSD interface for high-performance NGFF SSDs. The AMP-UP audio design can be seen configured along a orange line which shows the isolated PCB when the audio components are featured. We don't know the exact details regarding the I/O panel but we will get to know more about the X99 SOC Force motherboard in a short while so stay tuned for Haswell-E.