Users who are building themselves a Ryzen X370 or X399 platform based rig should be more than excited as motherboard makers are releasing new high-end options for them. The latest products are coming straight from Gigabyte and MSI who have released two powerful motherboards that aim the mainstream X370 and HEDT X399 platform.

Whether you are building yourself a powerful X399 system with a high-end Ryzen Threadripper chip or a mainstream user who wants to utilize the max potential of their Ryzen 7 / Ryzen 5 chip, there are new options out for you and they are at the very high-end segment of the market. MSI has their X370 Gaming M7 ACK which is a enthusiast grade product for the mainstream consumer platform while Gigabyte takes things a notch above the other HEDT options with their ultra high-end X399 Designare EX motherboard. Let's take a look at these boards in detail. 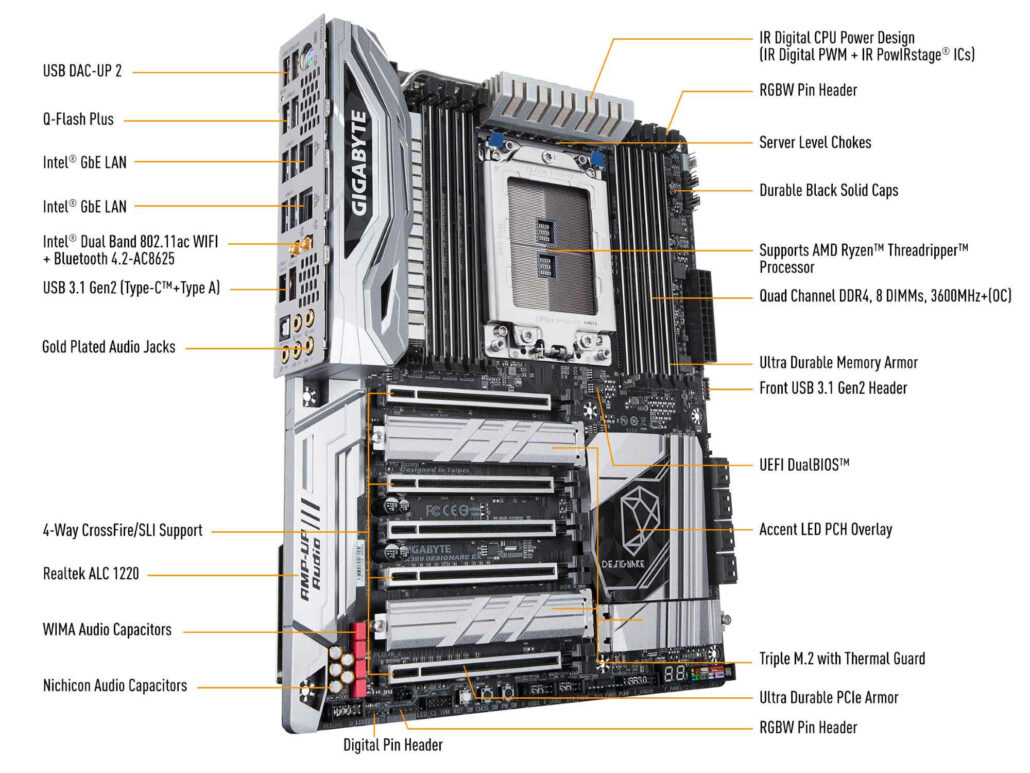 First up, we have the Gigabyte X399 Designare EX motherboard which is the flagship offering from Gigabyte in their AMD TR4 socket family. This motherboard is cram packed with features that even put the AORUS X399 Gaming 7 (another X399 motherboard from Gigabyte) to shame. The new one features a silver color scheme instead of the all black fr the heatsinks. There's also a visual lack of heatsink with the only place where you can find one being the PCH heatsink. That uses the accent RGB LED system that can be manually configured by the user. Overall, the color scheme suits the motherboard a lot and looks fantastic. 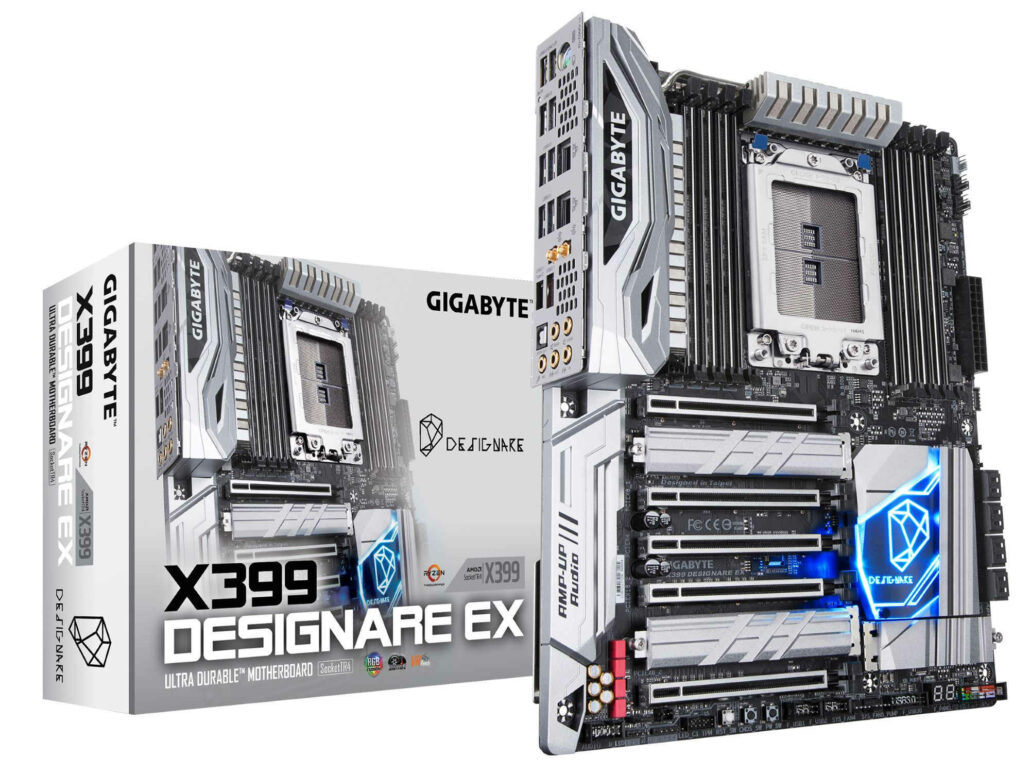 Coming to the specifications, the X399 Designare EX features an 8 phase PWM supply that is being cooled off by two large heatsinks, interconnected with heatpipe. The large CPU socket is powered by a 8 and 4 pin power connector configuration. One thing to note is that Gigabyte offers shielded DIMM slots on all high-end boards which is a great thing. There are a total of 8 DIMM slots that can be configured with memory capacity of up to 128 GB. For expansion, the board is fitted with 5 PCIe 3.0 x16 slots (x16/x8/x16/x8) and three M.2 slot. All PCIe slots come with metal shielding while the M.2 slots feature the M.2 heatsink from Gigabyte. This not only offers better cooling but adds to the durability.

Storage options include eight SATA III ports, two USB 2.0 front panel headers and a single USB 3.0 front panel headers. There's also a internal USB 3.1 connector. For audio, Gigabyte is using Realtek ALC1220 codec along with their DAC-UP technology to power better sound output. Rear panel I/O on the motherboard includes a PS/2 port, two USB 3.0 ports with DAC-UP technology, 6 USB 3.0 ports, two USB 3.1 (Type-A and Type-C) ports, two LAN ports (I219V or I211AT), a 7.1 channel audio jack and antenna connectors for the WiFi + Bluetooth module. Additionally, there's a full cover back plate on the rear of this impressive board which looks amazing. The motherboard is expected to hit shelves in mid October for a price of $389.99 US.

Those who are sticking with the mainstream Ryzen platform should also know that MSI is offering their new high-end X370 Gaming M7 ACK motherboard. This motherboard is a feature packed and has a broad range of I/O support making it a lovely options for Ryzen 7 and Ryzen 5 builders and overclockers. So around $240 US, you may ask yourself, what does this motherboard offer? 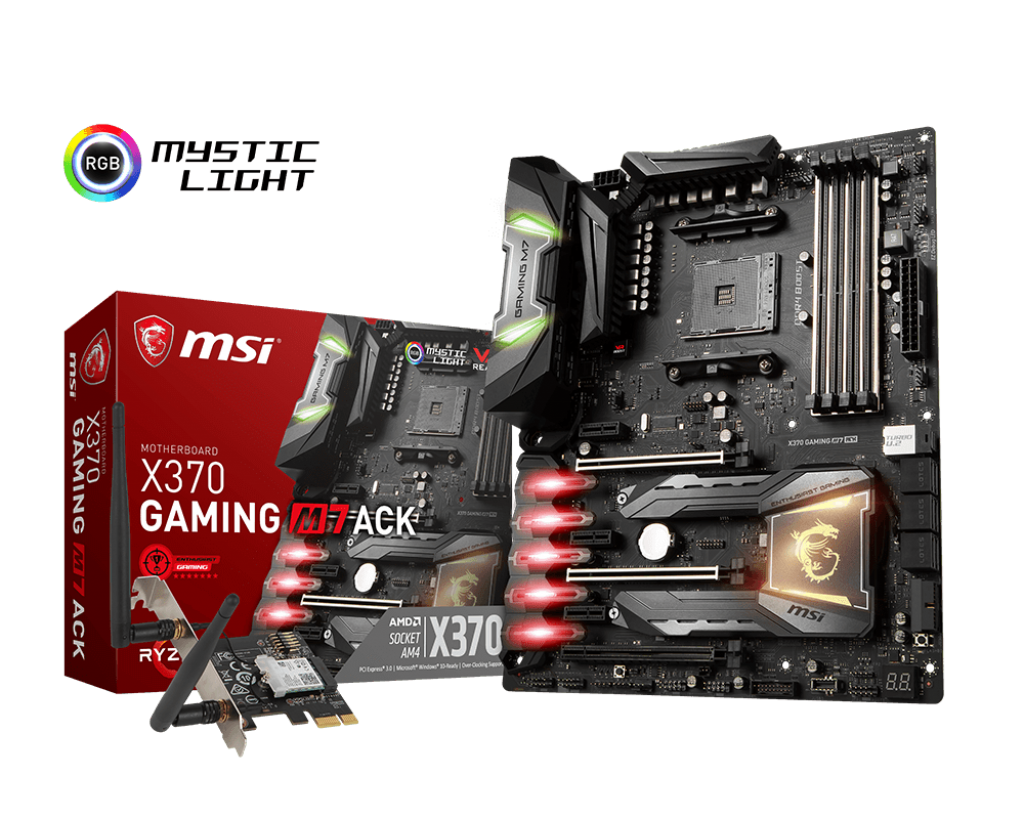 Well, in terms of features, it comes in a full black and silver color combination and outfitted with a 12+1 phase PWM supply that powers the AM4 socket. The socket is provided power through eight pin connector while the VRMs are hidden beneath two large heatsinks. There are four DDR4 DIMM slots that are shielded and can hold capacities of up to 64 GB at speeds of 3200+ (OC) MHz.

For expansion, MSI is giving users three PCIe 3.0 x16 slots out of which two are shielded. There are also three PCIe 3.0 x1 slots and dual M.2 slots. The good thing about the M.2 slots is that they are protected and cooled off by two heatsinks that extended from within the PCH heatsink. Storage is in the form of 6 SATA III ports, a single Turbo U.2 port, two USB 3.0 front panel headers and two USB 2.0 front panel headers.

Coming once again to the design, MSI has out laid the board with lots of RGB LEDs that look great. Each PCIe slot is placed next to a RGB LED indicator that shows whether the slot is populated by a expansion card or not. There's also a Dragon logo engraved inside the PCH heatsink that has RGB LEDs placed next to it. The I/O shield also integrated lighting system, offering extra bling to users. In terms of I/O itself, we are looking at three USB 2.0, 8 USB 3.0 ports, a PS/2 port, a single Ethernet port and a 7.1 channel HD audio jack. The motherboard additionally comes with an add in Wireless card that allows for Wireless networking capabilities such as WiFi and Bluetooth. Expect more new products for AMD's CPU family in the coming months.