NVIDIA is launching their GeForce GTX 960 graphics card tomorrow and we have seen several performance leaks during the past two weeks. There will be several custom designed cards at launch along with some of mini-ITX variants which Gigabyte is adopting on their G1 series graphics cards. A leak from chinese sources points out to the performance of Gigabyte's overclocked GeForce GTX 960 WindForce X2 which ships with factory overclocked frequencies and features a 160W custom designed PCB for further overclocking support. 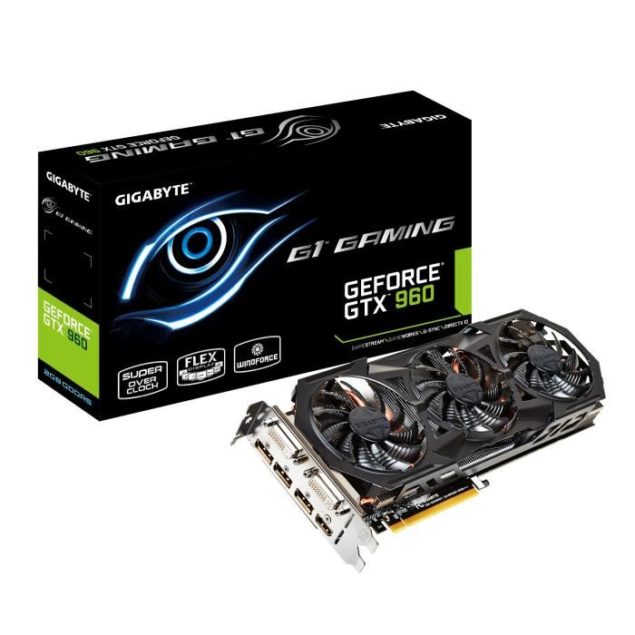 Rounding up the specifications, NVIDIA’s GeForce GTX 960 is the first to feature the latest GM206 graphics processing units which is a very skimmed down core compared to the GM204 core. As far as specifications are concerned, the GM206 based GeForce GTX 960 features 1024 CUDA cores, 64 Texture mapping units and 32 Raster operation units. It is clocked at 1127 MHz base and 1178 MHz boost clock. The graphics card also comes with a 2 GB GDDR5 video ram which operates along a 128-bit bus that is clocked at 7.00 GHz (1753 MHz QDR), pumping out 112 GB/s of cumulative bandwidth. The GeForce GTX 960 graphics card will feature a TDP of 120W that will be provided by a single 6-Pin connector while display outputs include Dual-DVI, HDMI 2.0 and a single display port. Technology such as DirectX 11.3 and DirectX 12 API support will be available. Lastly, the card features a single SLI goldfinger that limits it to only 2-Way SLI configuration however that’s expected from a marketing perspective of this budget card.

The expected price of the GeForce GTX 960 will be around $199 US as reflected by its highly cut down core revision. Factory overclocked and custom variants might be available at the official MSRP however some AIBs will be charging extra for their cards based on the design scheme and coolers. The card has been leaked several weeks ago and can now be seen listed across every major online retailer. Some forum members (mostly based in the APAC region) have already been able to purchase the cards, showcasing its performance.

So, the performance benchmarks provided below are not only restricted to the overclocked GeForce GTX 960 cards but also the reference cards as they are straight from Gigabyte's deck showcasing the performance diff between their custom and reference designs. The Gigabyte model listed here is clocked at 1241 MHz base and 1304 MHz boost, up from 1127 MHz base and 1178 MHz boost on the reference model. Rest of the specs are the same except the cooling designs and PCB. The reference design has a maximum TDP of 120W while the Gigabyte model could push for a 160W maximum TDP. The results are quite clear with the GeForce GTX 960 G1 Gaming coming on par with a Radeon R9 280 and Radeon R9 285 in 3DMark 11 and 3DMark Firestrike. The reference variant does lag behind a bit but should be on par with a Radeon R9 280 when the drivers get little bit optimized after launch. The performance charts can be seen below:

As for the other models, ASUS, Gigabyte, ZOTAC, Inno3D, MSI, Palit, EVGA, GALAX (KFA2) are all abroad the GTX 960 bandwagon. Following, you can see several custom GeForce GTX 960 models along with die shots of the GM206-300-A1 GPU core.