The much awaited gaming monster - Nvidia's GeForce GTX Titan Z was due to be launched in April. Yet it looks like Nvidia has landed itself into some serious trouble with the card still not being launched in the market, despite it being the mid of May. It has been speculated that the launch of the card has been delayed due to some software issues. Well, we have updates for you in that regard. Variants of the GeForce GTX Titan Z have showed up on Ebay and Amazon, with surprising prices. 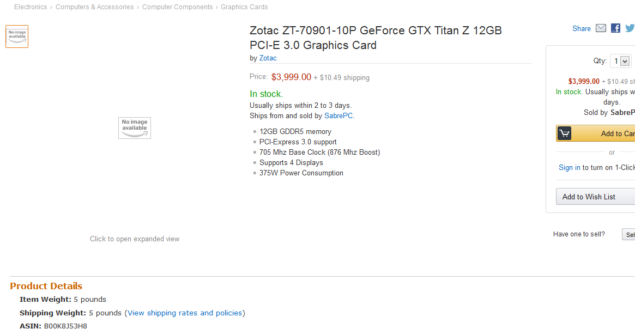 The GeForce GTX Titan Z priced at $3,999 On Both the Retailers - Zotac And EVGA Production Cards Available

With a launch date of 29th April, the GeForce GTX Titan Z was to boast some impressive specifications. These include Nvidia's GK110 core architecture, dual cores with 5760 cuda cores, 448 TMUs and 96 ROPs coupled with a massive 12gb VRAM. The card has been designed for gamers and developers both in mind. However, we have repeatedly seen delays regarding its release, with reasons being related to software and driver issues. Well we have more news for you in this regard. Variants of Nvidia's GeForce GTX Titan Z have appeared on both Amazon and Ebay. The one sold on Amazon is Zotac GeForce GTX Titan Z. Specifications cited are 12 GB of DDR5, PCI-Express 3.0 and a base clock of 705Mhz and boost clock 876 Mhz. The card has a power rating of 375 Watts. The seller is SabreZ and the card is priced at $ 3,999. The card is in stock with the traditional shipping price of $10.49. 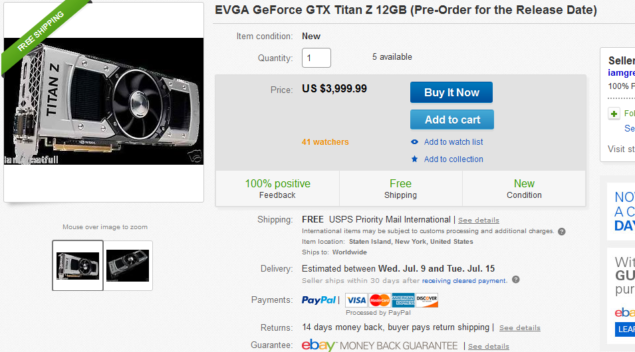 The seller on Ebay has also listed the same selling price of $3,999. The card being sold is EVGA GeForce GTX Titan Z.  The card on ebay is listed available only for pre-order before the actual release date. Delivery is estimated between Wednesday July 9th and Tuesday July 15th. The seller is iamgreatfull. However, there is no word yet on the official release of the card by Nvidia itself.