When NVIDIA launched the GeForce GTX 1080 Ti this past week they also launched their recently announced DX12 Game Ready drivers poised to improve the DX12 gaming experience by an average 16%. Something to consider when seeing this statement, which seemed to get missed by a few, was that this average improvement was over the initial launch of these titles comparing then to now.  So other than driver improvements the games could very well have seen improvements from updates on their end as well.  Regardless, we were interested in those claims so we set out to test to see what real improvements there were, not from the games launch drivers but rather the last set of drivers 378.66 to the new 378.78. 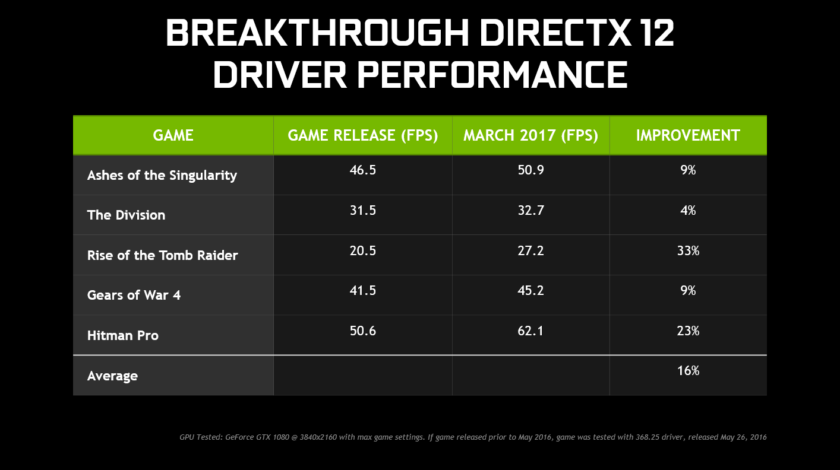 For our DX12 testing I wanted to take a moment and thank the guys at CustomPCReview again for helping develop a tool that will now allow us to deliver the same level of results for DX12 and Vulkan as we have with DX11. DX12 tests were conducted with OCAT and once the runs are all completed three times the averages for average FPS, 1% low, and .1% low are taken and plotted. We use 1% and .1% lows rather than absolute minimum as the absolute minimum typically represents an outlier frame and doesn’t usually represent actual gameplay. For these tests we ran all the games at 1440p.

For graphics cards we tested both our GeForce GTX 1080 Founders Edition along with our EVGA GTX 980 Ti SSC. We wanted to take a look at not only the current Pascal performance, but also wanted to see how things were faring on the older Maxwell lineup. 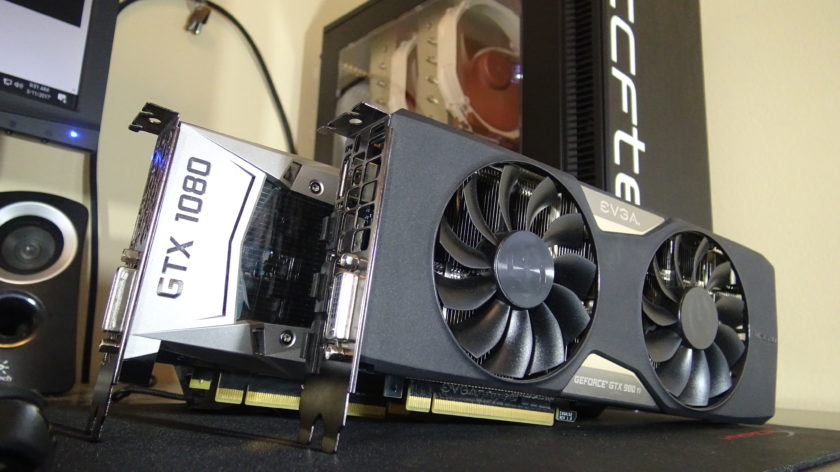 DOOM gets a slight bump in our test scenario, not much but it's there. It is also good to see that Maxwell got a bit of a tick upwards as well. 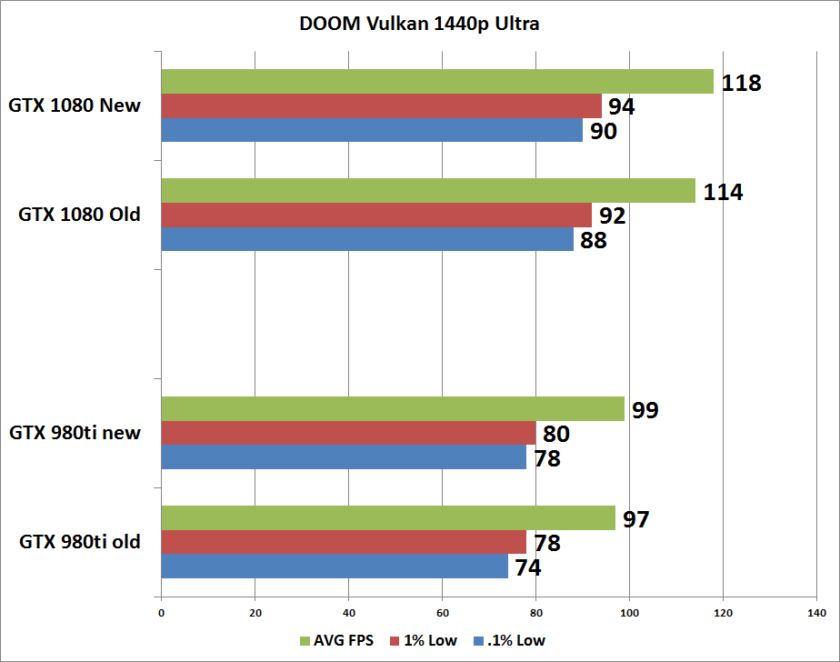 Unfortunately it seems GoW4 took a step in the wrong direction with Pascal, but held tight with Maxwell seeing a slight improvement across the bottom end of the frame rates. 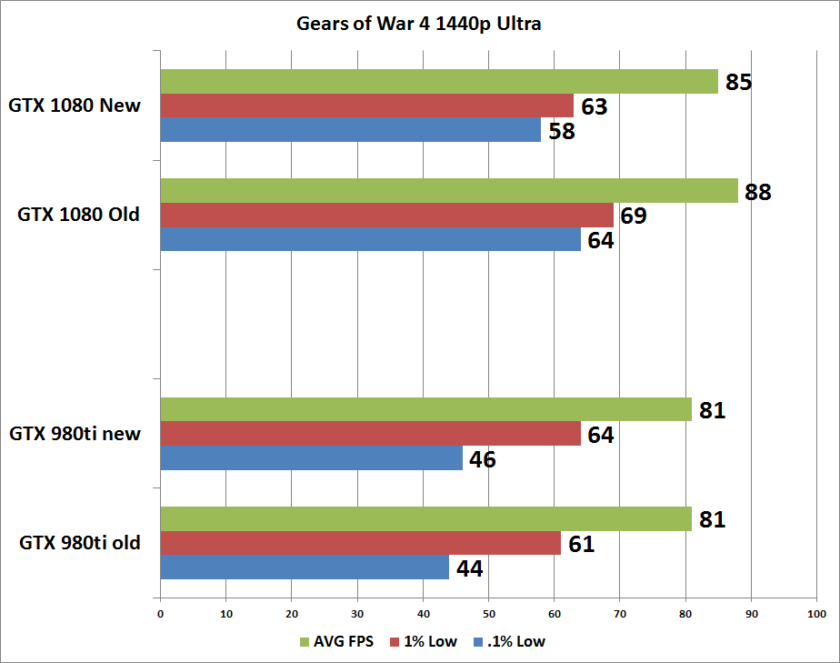 Okay, this is where things are most interesting. HITMAN sees a generous performance improvement with this driver from the previous one. This is an undeniable performance gain. While so far some would argue that the results are within margin of error territory HITMAN really shows the improvements being made, even on the older Maxwell architecture. 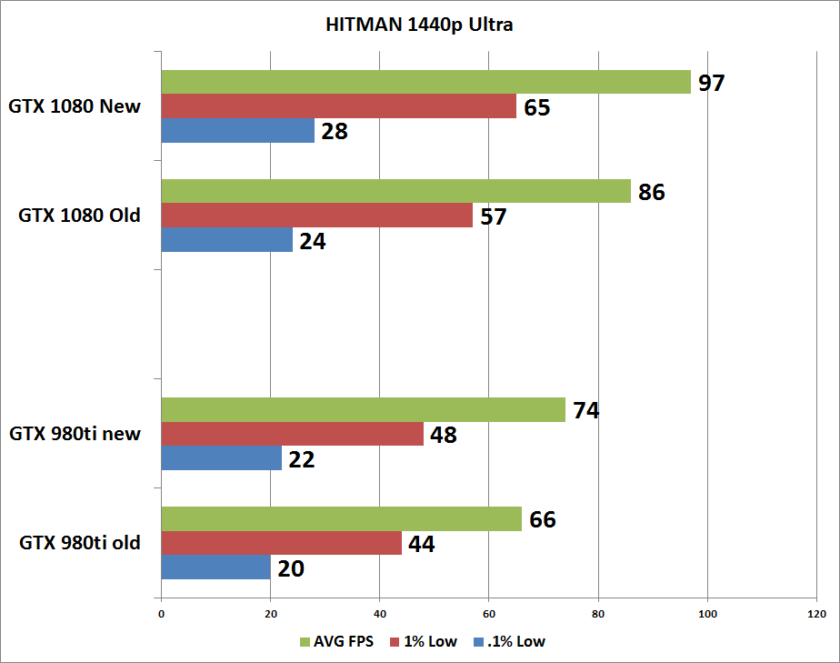 RotTR sees slight increases, which is still too close to call on Pascal, but sees a nice gain when using the Maxwell based GTX 980 Ti. With this the 980 Ti comes dangerously close to the performance of the GTX 1080 on the last drivers, albeit the 980 Ti is an aftermarket overclocked variant compared to a Founders Edition 1080, but still. 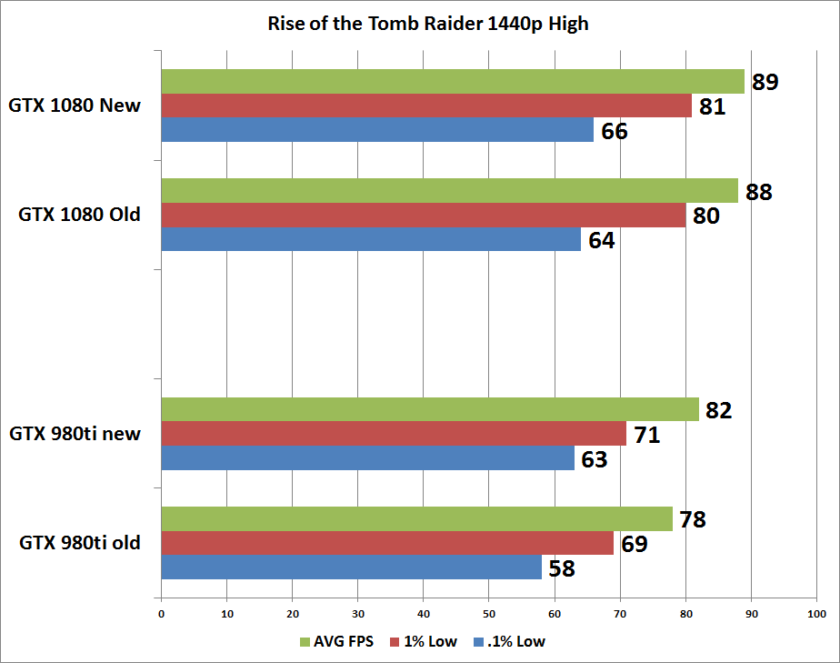 The Division is the best example of margin of error on both graphics cards. Honestly there's not a lot to write home about here, but then again is anyone still playing this game? I kind of miss it. 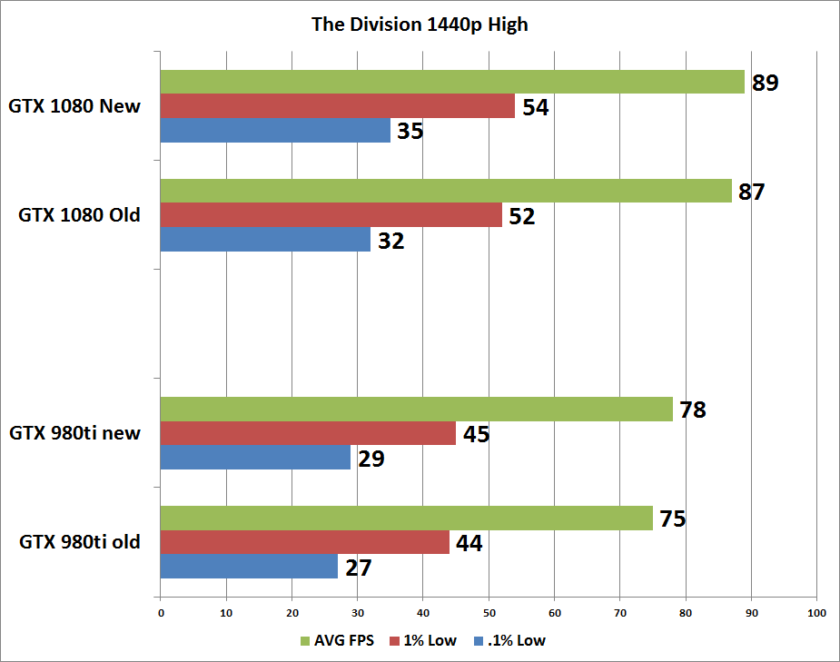 Where's the 16% Average improvement? I believe it's around but you will have to compare the older drivers (listed in the GeForce slide) and compare from there. Ultimately we wanted to see how much these drivers offered over their previous installment and was it enough to make a bold claim over? In some cases yes and others not so much. I was a bit deflated by the results of GoW4 since it was actually the first game I tested, but after making my way through the game stack and seeing what HITMAN delivered I was becoming confident that some real work went into this. These overall are good improvements in just a single driver update and hopefully shows a sign of things to come. What I left most pleased with was seeing that there were improvements on the GTX 980 Ti and that the solid Maxwell lineup hasn't been tossed to the wind or 'gimped' in this suite of games tested.