Looks like the Samsung Galaxy S6 Edge is all ready to make a bang when it comes next month in Barcelona. After the device's Exynos 7420 managed to get one up over its predecessor, by the looks of things its the iPad Air 2's turn this time around. Another variant of the device, SM-G925P has popped up in GeekBench this time around and the device has impressive scores that fall short only to the Nexus 9 and the iPhone 6 duos. 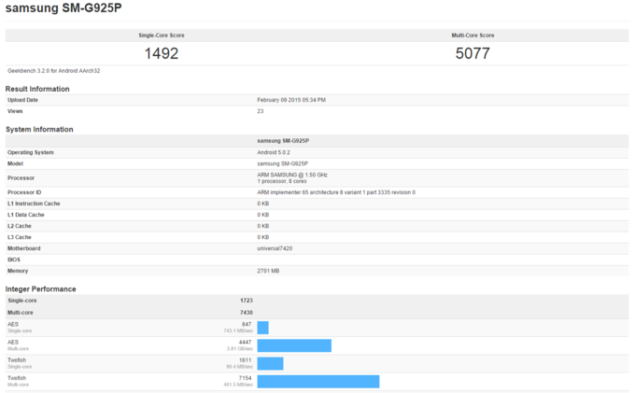 Samsung's in-house Exynos 7420 processor and the Galaxy S6 Edge have managed to break records in multi-core performances in GeekBench according to today's news. Looking at the picture above the device manages to get a score above 5000 points that manages to put it in the lead when it comes to multi core performance in mobile devices.

Single-core scores for the Galaxy S6 Edge don't end up disappointing either with a solid score of 1492. With impressive benchmark scores of the Galaxy S6 popping up here and there, one thing for sure. Samsung's upcoming devices should be at the top category when it comes to your mobile computing needs, which is the case with any flagship device out there. But while these scores might be impressive, the Galaxy S6 should also come with design improvements on board, if it is to make the impact Samsung's looking for with its flagship device launch.

Whatever the case may be, we'll be here to let you know. So enjoy today's benchmark scores of the Galaxy S6 and rest knowing that performance is an angle of the device that Samsung does seem to have worked out in its flagship. We'll keep you updated for any changes along the way.