Samsung Galaxy Note 4 has been leading all the battery tests that it has been through. This year's Sammy phablet was powered with a 3,220 mAh battery, however, the younger sibling Samsung Galaxy Note Edge got a little less of that juice in its 3,000 mAh battery. With Note Edge coming in the market worldwide this November, it is quite a time to share with you how long the beautifully curved device will last you in a day. 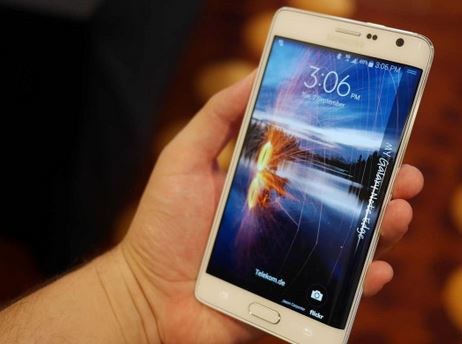 This early Samsung Galaxy Note Edge battery test comes through the folks at Phone Arena who have reviewed and test the juicer on this new device coming from Korean tech giant. The device while shows promising results isn't at par with even it's big brother - the Galaxy Note 4. Samsung Galaxy Note Edge crosses the 7 hours limit on the test while the Note 4 clocked over 8 hours and 43 minutes on the same test. The phablet duo is still quite behind than the latest trend of offering days long battery life. As you can spot from the screenshots below, the device gets quickly charged which eases up the pains a little bit. You could also swap the battery as Samsung is offering an easy swappable juicer design.

The Galaxy Note Edge boasts the same specifications as the Note 4 and adds the new curvy flexible design on top. Note Edge is a quad-core 2.7 GHz Snapdragon 805 processor with 3 GB of RAM and 32 GB of internal memory capable of expansion to 128 GB thanks to the microSD slot. Samsung Galaxy Note Edge features a 16 MP auto focus rear shooter with optical image stabilization module with a 3.7 MP front camera. Adaptive Fast Charging will help the device charge up to 50% in just 30 minutes. Comes along the Ultra Power Saving mode which extends 10% of this 3,000 mAh juicer to last longer.