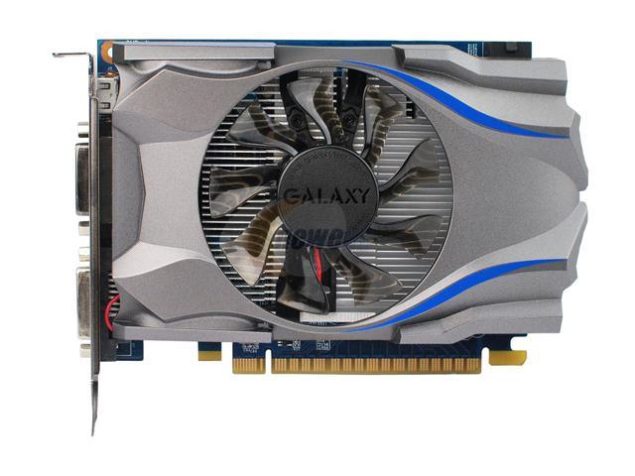 Galaxy Tech's upcoming GeForce GTX 650 Ti GC 1GB graphics card has been pictured and was listed on Newegg. Newegg, knowing the card was still a week away from launch had the listing removed instantly however we took a picture of the card within time and some key details which are mentioned below.

The Galaxy GeForce GTX 650 Ti GC (65IGH8DL7AXX) features 768 Cuda Cores running at 966 MHz Core clock (No Boost clock). There's also a 1GB GDDR5 (128-bit) memory which is clocked at 5400 MHz. The card doesn't supports SLI like the GTX 650 since there's no gold-finger on the PCB. The PCB itself is identical to that of Galaxy's GTX 650 except the fact that it uses a GK106 core and a few more watts of power although there's only a single 6-Pin connector.

Cooler used on the card includes a single fan which pushes air towards an aluminum heatsink. It is vented out through the exhaust port where display outputs exist in the form of Dual-DVI and HDMI. The card was listed for $149.99 which is most likely the official price of the reference GTX 650 Ti models, overclocked models would vary from $159-$179. Expect 2GB models to hit retail too during launch on 9th October.