Galaxy, the leading Chinese graphics card manufacturer's has shown an army of their latest HOF "Hall of Fame" products such as the triple fan GeForce GTX 780 Ti HOF and the triple fan GeForce GTX 750 Ti HOF. You can call me a fan of Galaxy Tech graphics cards judging from my previous posts but in all seriousness, their cards adopting the white PCB look stunning from the rest of the offerings from GPU companies and their custom PCB designs are some of the best in the tech industry. 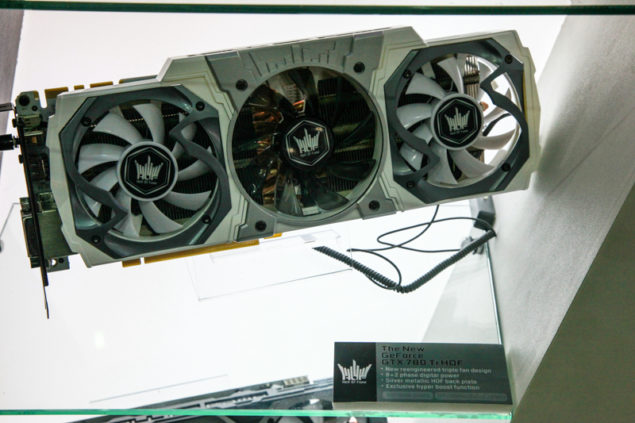 I'll start this post by detailing one of my personal favorite graphics card based on the GK110 core, the GeForce GTX 780 Ti HOF. The GeForce GTX 780 Ti HOF comes with a pure white PCB which features absolute high-grade and quality components such as a 8+2 Phase digital power design equipped with Premium POSCAP and MLCC capacitors, Voltage read points, KEMET tantalum capacitors with a capacity of 330uF. On the back, six MDU3606 MOSFETs from Magnachip can also be spotted. To deliver high-speed under overclocked specs, the memory is equipped with its own heat spreader for better heat dissipation resulting in higher clock speeds not only on the core but memory too.

The card features the GK110 core featuring 2880 CUDA cores, 224 TMUs and 48 ROPs followed by a 3 GB GDDR5 memory which runs across a 384-bit wide memory interface, clocked at 7.0 GHz churning out 336.0 GB/s memor bandwidth which is insane. There's an exclusive hyper boost function which boosts the clock speeds to a limit that is pre-defined by the manufacturer for easier performance increase however users can still manually overclock it as they seem fit and make use of the beefy VRM design.

The card sounds great from the technical perspective but its not the specifications that make the Galaxy GeForce GTX 780 Ti HOF such a well-built card, its the design. For the first time ever, Galaxy has gone with a triple-fan cooler which is used to cool the entire section of the PCB. The card is massive in length and coupled by the pure white PCB and shroud scheme, the card looks absolutely gorgeous. It even comes with a brushed aluminum back-plate which hides the components on the back side of the board. The shroud features three fans, two 92mm on the sides followed by a 100mm PWM fan in the middle. The smaller fans feature the white color while the one in the middle is arcylic. We can see two large aluminum fin array heatsinks beneath the heatsinks that are equipped with thick copper heatpipes which dissipate heat from the GPU core, VRM, PLL, Memory and power components and cooled by the fans on the shroud. Display outputs include Dual-Link DVI, HDMI and a Display port. 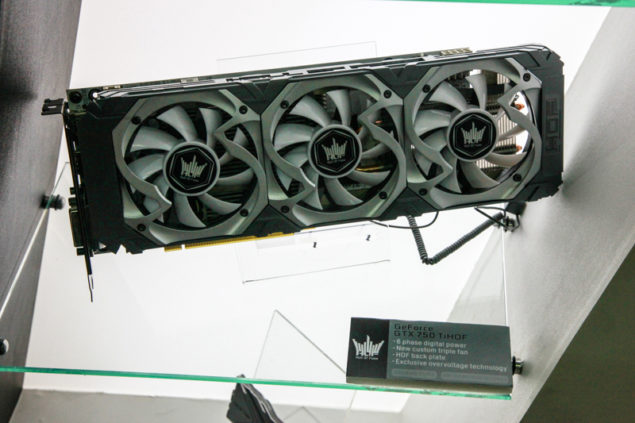 The Galaxy GeForce GTX 750 Ti HOF is quite a surprise to be honest, of all the graphics companies out there, who would have ever thought that Galaxy would be the one releasing the most high-end GTX 750 Ti HOF design of all time. The Galaxy GeForce GTX 750 Ti HOF makes the HOF branding proud with such a great design such and only requires a single 8-Pin power connector. This means that the card does have a total TDP of 225W even though it is based on the Maxwell GM107 architecture but you're missing the point. This specific card is built for the over-clockers community and not the power efficient users based off its design.

The GeForce GTX 750 Ti HOF features a 6 Phase digital power design featuring the quality components of the other HOF products we just mentioned above. It retains the pure white PCB color scheme and even the cooler shroud which offers a triple-fan design matches this scheme with a mix of silver and white colors. The three 92mm PWM fans provide air to the dual aluminum fin heatsinks underneath them which are interconnected through several copper heatpipes. The card comes with Galaxy's HOF backplate and even includes exclusive overvoltage technology. We have seen just how well of an overclocker the GM107 gets with proper power and this might just hit 1300-1400 MHz on air and possibly even more with some professional skills. The card features the GM107 core with 640 CUDA cores and a 2 GB GDDR5 memory that operates along a 128-bit interface. Display outputs include Dual-DVI, HDMI and a display port. 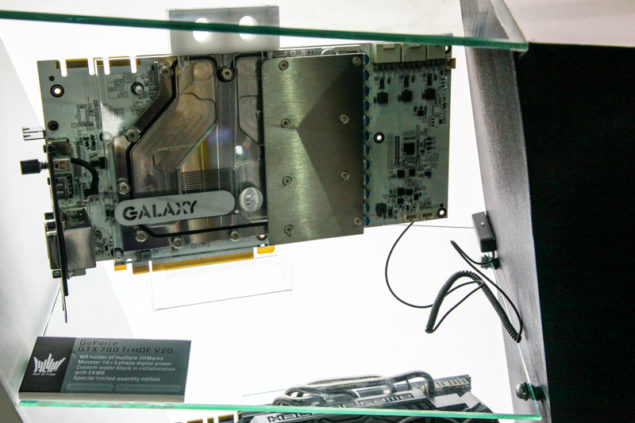 You might remember the GeForce GTX 780 Ti HOF V20 which broke the 3DMark world record a few months ago. If you don't, then you should know that this is as high-end its get with the GK110 core since the the Galaxy GeForce GTX 780 Ti HOF V20 “Hall of Fame” edition blows away the previous GTX 780 Ti HOF card and instead of the GK110-300-A1 chip incorporates NVIDIA’s flagship GK110-425-B1 which is the fully unlocked Kepler core featuring 2880 Cuda cores and a 3 GB GDDR5 memory running across a 384-bit interface. The HOF edition won’t be kept clocked at reference clocks but would feature some impressive over the GHz frequencies and still leave abundance of room for overclocking enthusiasts. To achieve the world record, overclocker MadTse pushed the card beyond its limits by achieving a core clock of 1886 MHz and 2000 MHz memory clock (8 GHz effective) which is superb.

GALAXY Tech is renowned for their white colored PCBs and they have used the same design scheme on their ultimate GeForce GTX 780 Ti HOF V20 with a beastly looking extended PCB which rivals that of the EVGA GTX GeForce 780 Ti KingPin and MSI GTX 780 TI Lightning. The PCB features 16 Phases (NVVDD GPU core), 3 phase FBVDD (memory) and 1 phase PEX VDD.The PCB is equipped with the industry’s high-end Panasonic tantalum capacitors along with the addition of several KEMET tantalum capacitors with a capacity of 330uF. On the back, MDU3606 MOSFET from Magnachip are featured. To deliver high-speed under overclocked specs, the memory is equipped with its own heat spreader. The PWM supply will come with its own set of heatsink in the final retail variant. Power is pumped through Dual 8-PIN and a single 6-Pin connector which equates to a TDP above 300 Watts. Galaxy went with a custom designed water block in that's built in collaboration with EK Water Blocks and the card itself comes in a special limited quantity edition. 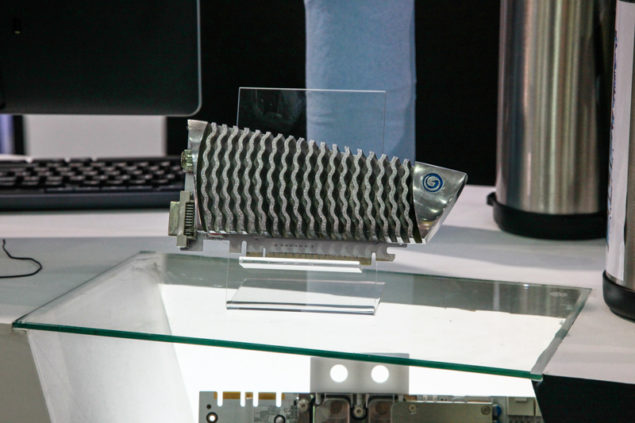 Galaxy also displayed their latest silver HOF edition of their fish cooler which has become the common name of their GT 640 passive heatsink graphics card. The heatsink resembles a fish hence it is being called the HOF Fish GPU and can be bought over 15 different colors which is amazing. Aside from GPUs, Galaxy also displayed their high-performance DDR3-3000+ MHz memory with a custom PCB to improve overclocking, a shiny silver plated LED and the HOF heatsink which looks cool. Now if Galaxy offers DDR4 memory with the same design then that would be great.

Many thanks to XFastest for sharing the Galaxy Computex 2014 booth pictures. You can check out the full article here. 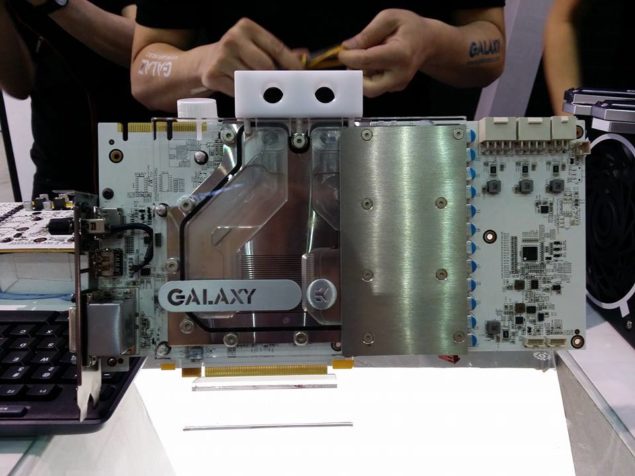 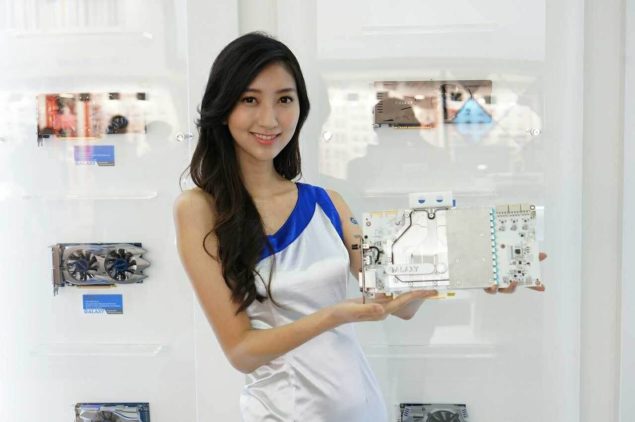 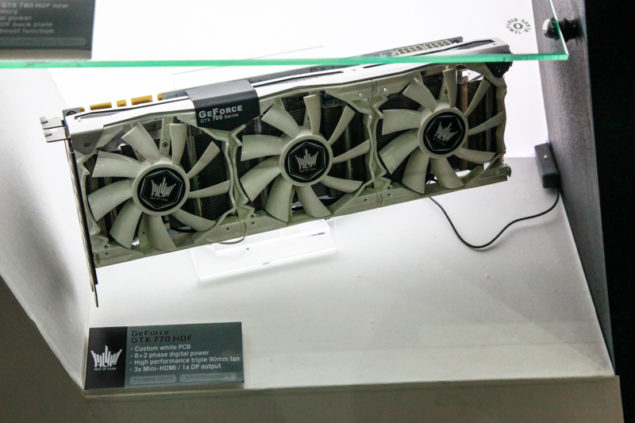 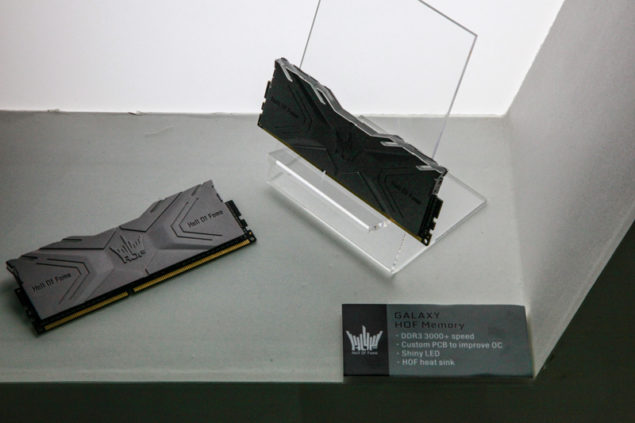 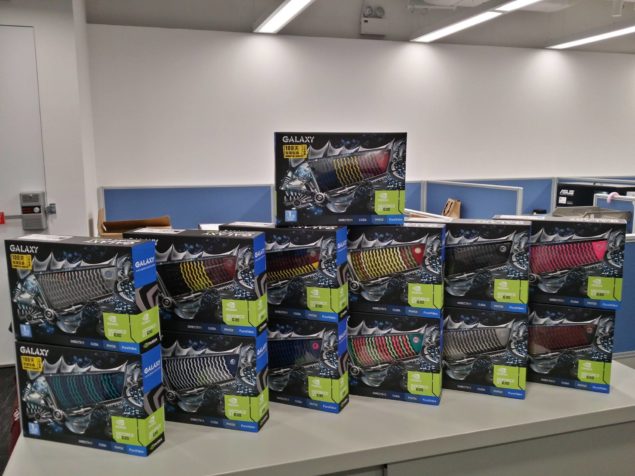