Galaxy Buds Pro Are Now Even Closer to the Official Announcement

Just like the Galaxy S21 series, the Galaxy Buds Pro has started making rounds too, and we are more than aware of the fact that this is what Samsung is going to unveil alongside their next flagship device. Now, some information leaked over the past couple of days, including the name and the certification.

We also know that the Galaxy Buds Pro is also going to feature active noise cancellation and will have a design language that will be similar to the Galaxy Buds that were released last year.

A new Samsung device with the model number SM-R190 has been certified by the FCC; the model number is, of course representing the Galaxy Buds Pro that we have been talking about for some time now. In addition to the certification, a new diagram has also surfaced that shows how the case of these true wireless earbuds is going to look like. From the looks of it, we will have a case that will look a lot like the one with the Galaxy Buds Live.

In addition to that, the information that we have gotten our hands on reveals that the Galaxy Buds Pro will bring a case that has a 500 mAh battery, alongside a USB Type-C port and 2.5W charging. You can look at the certification below.

It is important to understand that the FCC certification means that the Galaxy Buds Pro is almost ready to be launched, which makes sense since Samsung is planning on launching them alongside the Galaxy S21. Both will be going official in January. As far as the diagram is concerned, you can look at that below. 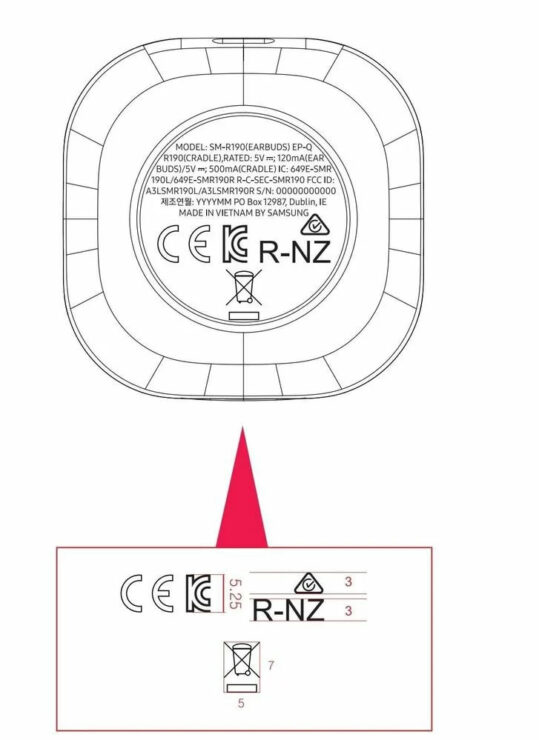 There is no other information given to us by the source at the time of writing. Still, looking at all the evidence that we have received, it is safe to say that we have enough to go by and are certainly looking forward to what Samsung has to offer in terms of their new true wireless earbuds.