GALAX's upcoming GeForce GTX 980 HOF which features a custom designed, white colored PCB was spotted over at Intel's X99 LAN Party even which was held in Beijing, China. The card was spotted running on a setup which was used by ASRock's Nick Shih to achieve a world record overclock on Intel's latest Extreme Edition CPU, the Core i7-5960X. 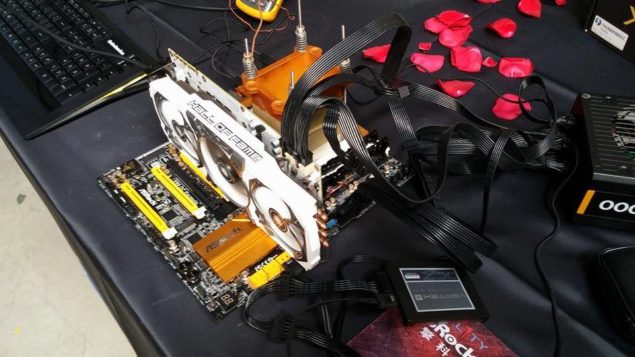 So let's talk about the world record before we move in to detail the latest HOF graphics card. Nick Shih who is considered one of the professional and renowned overclocker is also ASRock's in-house man who has played a part in the development of their OC series motherboards such as the OC Formula series based on the Z87, Z97 and X99 chipset. With some LN2 at hand, Nick achieved an overclock of 6.6 GHz on the Core i7-5960X using a test platform which consisted on the ASRock X99 OC Formula motherboard, G.Skill Ripjaws IV (3300 MHz) rams and also the latest GeForce GTX 980 HOF from GALAX (formerly known as Galaxy Microsystems). The overclock was achieved with an insane voltage supply of 1.818V at the core and the single core was clocked as high as 6.594 GHz (63.0 x 104.7 MHz BCLK). Those are really some impressive numbers but the most interesting thing about this news is the card itself.

I have been a huge fan of the HOF series and I really appreciate their custom designed PCB being one of the most high-end designs ever conceived in the graphics industry. The only other brand I consider that can match the brutish design of HOF's PCB is either the Colorful iGame KUDAN series or the MSI Lightning series. Then there comes the white PCB factor, a milky white PCB absorbed in a white cooling shroud with silver texturing that just looks amazing.

Galax has gone with a triple-fan cooler which is used to cool the entire section of the PCB. The card is massive in length and coupled by the pure white PCB and shroud scheme, the card looks absolutely gorgeous. The shroud features three fans of which two feature the white color while the one in the middle is acrylic. We can see two large aluminum fin array heatsinks beneath the heatsinks that are equipped with four thick copper heatpipes which dissipate heat from the GPU core, VRM, PLL, Memory and power components and cooled by the fans on the shroud. Display outputs include DVI, HDMI and three display ports. The PCB on the card is non-reference and we can note that it is an extended version which shows off the high quality design GALAX will be using for the retail models. The card is powered by two 8-Pin connectors which will deliver unprecedented core overclocking power.

From a technical perspective, the GeForce GTX 980 HOF will feature 2048 CUDA Cores, 128 TMUs, 64 ROPs and a 4 GB GDDR5 VRAM running across a 256-bit bus interface. The card will feature factory overclock out of box but will leave ample room for overclocking enthusiasts to play with the clocks on the card. We haven't seen the entire PCB of the card yet but I have requested GALAX to send me a picture of it. The pricing of the card will be over the reference models which retail at $549 US. 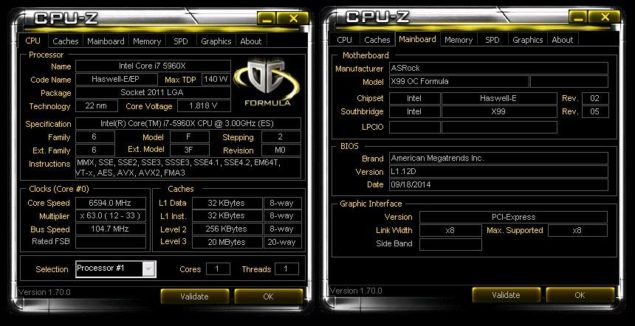