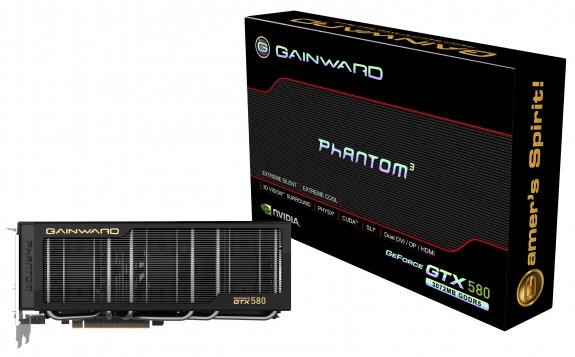 Gainward introduced its first Phantom Edition GPU last month which you can see here and now another Phantom Edition Graphics Card has been released based on the GTX 580 Core, Since the card is based on the same GF-110 Architecture so there's no modification on the heatsink. But a Major Change in the card is that it uses 2GB memory chips yielding a total memory of 3072Mb or 3GB which is massive. :O

This memory is spread across 12 2GB Memory chips on the PCB along a 384-bit wide GDDR5 memory interface. Packed with 512 Cuda Cores the card sticks with Nvidia's Reference clocks for GTX 580 783/1566/4020. The PCB is colored Black and the heatsink also comes with a Black Aluminium Fin Array to which heat is transferred by six heatpipes and is cooled by fans inside the heatsink block which draw air from the aluminium block and throw it towards the PCB hence giving the Cooler a neat look.

The GPU comes with two DVI, and one each of HDMI and DisplayPort. The card will sure cost a bit more than the Reference card but at whatever cost its launched it'll worth it.