Futuristic racing games were all the rage a few years back thanks to the popular WipEout series and a few other games. These games have been out of the spotlight for quite a while now but earlier this year R8 Games tried to make the genre relevant again with Formula Fusion. Earlier today R8 Games Founder and CCO Andrew Walker has shared some new details on how the game's development is proceeding and on a very interesting feature that will be added to the game. 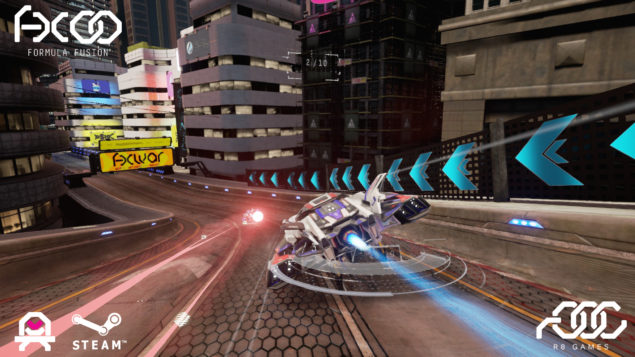 On the game's official Kickstarter page, Andrew Walker stated that the team is now in the position to talk more about the Formula Fusion that players are expecting. Track development is under wraps at the moment, but Mr. Walker revealed that multiplayer aspect is well underway and that the team is working on adding a cockpit view which will also include a VR option.

Track development is under wraps at the moment, soon to be revealed, but I ‘can’ tell you that multiplayer aspect is well underway and we are also working on a cockpit view which will also include a VR option. In addition, you will see weapons start to make more of an appearance and further craft refinements.

Formula Fusion has been clearly influenced by the WipEout series, sharing plenty of similarities with it such as the anti-gravity racing mechanic, track boosts and more.

Formula Fusion is a near-future anti-gravity racing game that brings fast, frantic, adrenaline-fuelled racing together with the raw sound of a thumping dance soundtrack and psychedelic visual effects. Set in the dystopian year of 2075 in the redeveloped ruins of New York State, Formula Fusion’s stunning atmospheric environments complement the dirty-urban visual design of The Designers Republic that truly set the stage for the Formula Fusion W.A.R Leagues – a dog-eat-dog racing competition born on the back of F1 racing.

Formula Fusion is now available for purchase as a Steam Early Access game.