At the GALAX GOC 2015 event, Futuremark showcased their latest 3DMark Time Spy benchmark which is based on the latest DirectX 12 API from Microsoft. Futuremark's 3DMark is one of the most popular benchmark that allows users to test and compare their systems overall and graphics performance through using latest graphics features and APIs which are incorporated in next generation AAA titles. 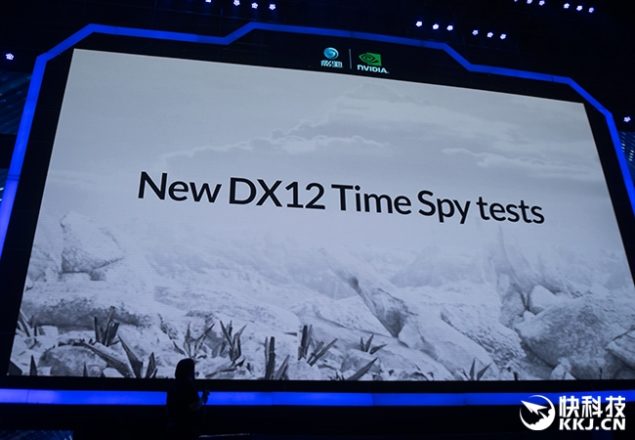 We have seen DirectX 12 in action in several gaming titles and benchmarks, 3DMark's first API-Overhead test demonstrated a key aspect of the new API that allows the graphics processors to render more draw calls and provide better visual details. DirectX 12 has tons of benefits over APIs that came before it, namely DirectX 11. While Mantle also pushed as a low-overhead API, the actual differences lie in the fact that DirectX 12 also adds to the image quality of the specific title it is used to render along with added support for other functionalities that allow graphics to run simultaneously in a more refined and efficient manner compared to last generation APIs. 3DMark's API overhead test allows users to test their cards in three different APIs, DX11, DX12 and AMD Mantle API which runs exclusively on AMD's GCN based cards.

The titles that were the first to feature support for DirectX 12 API include Ashes of the Singularity from Oxide Games and Fable Legends from Microsoft. AOTS made use of the DirectX 12 API where AMD saw a marginal increase in performance thanks to the Async infused architecture while NVIDIA maintained the same graphics lead as DirectX 11 and most of it had to do with un-optimized DirectX 12 drivers and performance already being up to mark with the DX11 drivers. Titles that opted to use more of the IQ improving features of DirectX 12 such as Fable Legends saw NVIDIA once again picking up the lead against AMD. Next year, several major developers plan to ship their latest AAA titles with DirectX 12 API and both manufacturer's are aiming to up their driver support for the new API.

While game developers ready their new titles, Futuremark's Product Manager, Pasi Virtanen, announced at the GALAX GOC 2015 event that they are developing their latest 3DMark benchmark which will use the DirectX 12 API. The new 3DMark will focus around the tech and features which DirectX 12 is going to offer in future next-generation AAA titles. The benchmark will include several game tests, one of which known as "Time Spy" was showed at the event that revolves around a museum filled with highly detailed objects. The whole tests makes use of 3D rendering using DirectX 12 API to test performance of graphics cards. The benchmark test runs at 2K or 1440P resolution and is 5 times (5x) more heavier than 3DMark Fire Strike which is available in the 3DMark 2013 benchmark suite. That means that the graphics test will require some serious horsepower to render and only the best performance cards will be able to score decent numbers in the test.

The latest 3DMark benchmark test will only be support on Windows 10 OS (64-bit). No launch date or size of the download is available but Pasi mentioned that the benchmark should be ready in Q1 2016 so that's around the time it should be made available. Videocardz has uploaded a video showcasing the new 3DMark "Time Spy" test which could be seen below: