A fully assembled iPhone 6s display component has been leaked on video. The source claims that the panel is Force Touch ready. 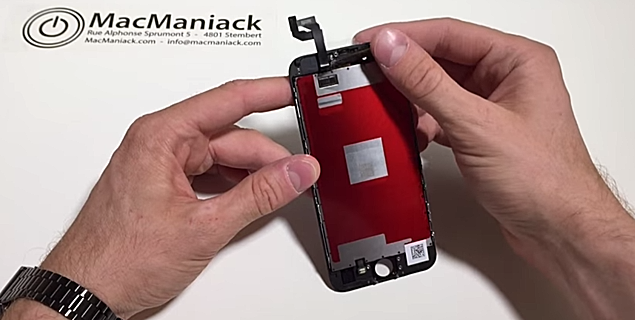 The iPhone 6s and iPhone 6s Plus have been rumored to feature a Force Touch display, the tech which made its big debut on the Apple Watch, before ultimately making its way to Cupertino's lineup of MacBooks. And now, according to several leaks, and this new one from MacManiack, it's a sure shot deal that Force Touch tech will indeed be a part of the iPhone 6s lineup of flagship devices.

The video in question shows off a fully assembled iPhone 6s display component, and there are a few things which remain unchanged when compared directly to the iPhone 6. For example, the front facing FaceTime camera and the proximity sensor placement remains unchanged this time around. And this is something which is to be expected since the iPhone 6s is a mere evolutionary upgrade over the iPhone 6, and not a revolutionary one.

One thing that has changed though is the ribbon connectors and that the LCD shielding is now glued into place. Apart from these minor changes, the source believes that Force Touch is definitely making its debut in the iPhone 6s when it's released come September time.

The video is over a minute long and we suggest you check it out in its full glory. And for your convenience we have embedded it below.

Like we mentioned in our iPhone 6s roundup, Force Touch will open the floodgates to a whole new range of possibilities for app developers. Invoking a simple action, such as creating a new message to be sent off to someone, is a simple case of pressing down hard on the display when the Messages app is in view, just like how you would on the Apple Watch. But it would've been great if Apple also took the OLED route this time around, but we're sure the Cupertino giant is going to save the big surprise for next year. Who knows.

The iPhone 6s and iPhone 6s Plus are bound to be announced on September 9th during a special media event, at which it's also rumored that the company will take the time to announce the Apple TV 4. Whatever Apple announces at the event, we'll have it covered right here, so stay tuned for that.

If you want to read about all the leaks and reports we have witnessed so far in one place, then be sure to check out: iPhone 6s Specs, Rumors, Features, Price, Release Date [Complete Roundup].