Some fresh Mafia 3 screenshots have surfaced from a GDC presentation that was presented given by the game's systems designer, Seth Rosen. 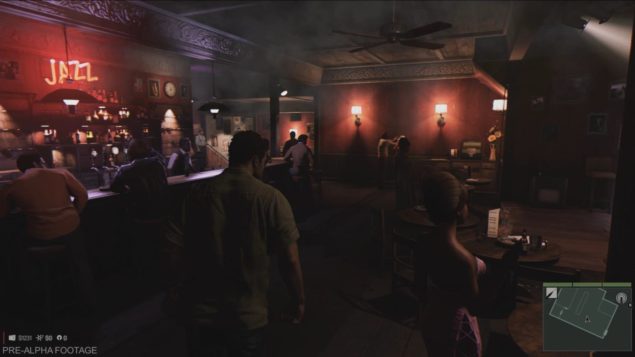 The GDC 2016 (Game Developers Conference), was held in San Fransisco last month, and during the event Mafia 3 developer, Hangar 13, organized a design session about the "living world" of Mafia 3.

Games offer new worlds to players for them to explore and interact with. A game's world is a set and the player is the lead actor--as amazing as starring in a one-person show might be, a world that surrounds the player with life can be far more immediate and engrossing. Environmental storytelling does a great job of hinting at lives past, but AI actors with systemic behaviors are the key to demonstrating the life of a level right in front of the player. The presence that these performers and their interactions lend to the experience help the player to believe in the world itself. The talk will look at the systems driving Elizabeth, BioShock Infinite's companion character, and the "living world" of Mafia III, relating lessons learned during development and giving guidelines for bringing a level and its occupants to life.

Mafia 3 was announced back in August last year. The game is to be released in 2016 for PC, PS4, and Xbox One. The game is being developed by Hangar 13, a new development studio under the 2K publishing label. 12 minutes of narrated gameplay for the game, can be watched here.

The game is set in a reimagined New Orleans in 1968, one of the most tumultuous years in American history. This version of New Orleans is bustling with activity, complete with era-inspired cars, fashion and music. During this turbulent time, a cloud of corruption hangs in the air and the city has become a haven for organized crime. The Italian mob controls illegal gambling, drugs, and prostitution, while corrupt police and politicians line their pockets with the proceeds.