An interesting turn of events over at the DirectX12 GDC Reveal. They demoed Forza 5 at 1080p and 60fps Rock Solid and almost everyone thought it was running on the Xbox One. This post will clear up a major misconception: Forza 5 was actually running on a beast of a Rig powered by a GTX Titan Black GPU. 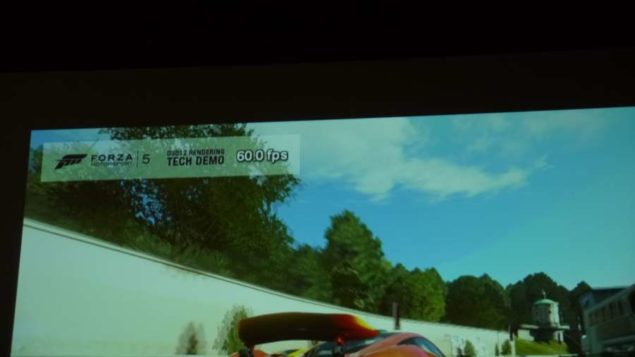 As you may know, Microsoft demoed Forza 5 running at a rock solid 60 frames per second at 1080p. The addition of DX12 to Xbox One seemed like a brilliant conclusion to the entire Resolutiongate sage because Microsoft had previously made claims that such a thing (every game running on 1080p/60fps) could only be possible if the cloud was used so this was a very pleasant surprise. However it turns out that Forza 5 Demo was actually running on a Super Powered GTX Titan Black powered rig. And the aim was to show the unbelievable porting power of the DX12 API. This raises very very interesting questions about Forza 5. But before we do that, a picture of Forza 5 Tech Demo at the DX12 reveal, courtesy of PCPer.com;

Now here is Nvidia's official blog post about DirectX 12 and note the para of Forza 5 in particular, I have taken the liberty to quote it for you along with a screenshot: 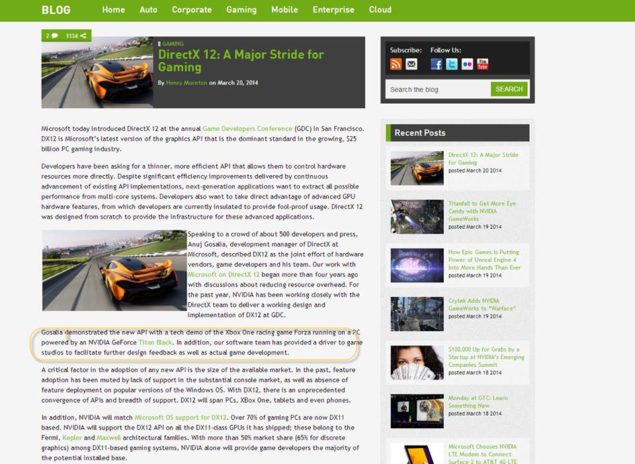 "....the new API with a tech demo of the Xbox One racing game Forza running on a PC powered by an NVIDIA GeForce Titan Black. In addition, our software team has provided a driver to game studios to facilitate further design feedback as well as actual game development."

So now there is an interesting point to consider. Does this mean that we will be seeing Forza 5 on PC anytime soon? However Nvidia has updated its statements to state that Forza 5 will not be coming to PC after all since the purpose was only to show how easy a port can be. In any case, it is of extreme interest to me and to our readers that no actual Demo of DX12 on the Xbox One AND/OR Performance Numbers of the same were given.

Saw a lot of comments, this needs to be clear: #Forza5 at #DX12 was running on the Titan Black people, not Xbox One. http://t.co/z46HGGsYbp

Brad Wardell Talks About DirectX 12 and Xbox One Benefits