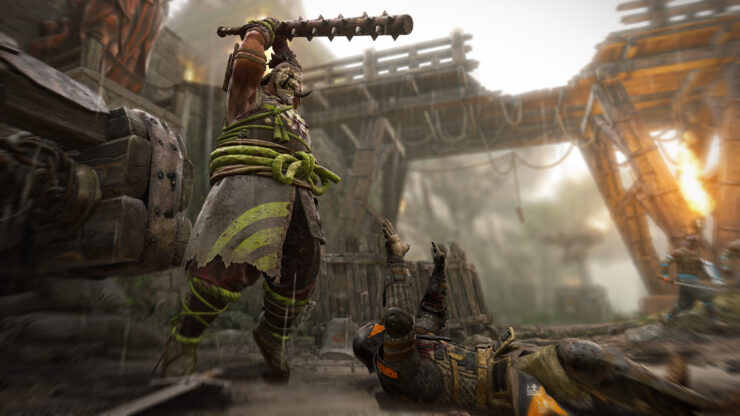 When the mighty Vikings, Samurai and Knights finally collide on the same battlefield…who will reign supreme?

War of the Factions will track all multiplayer activity across all platforms in the closed beta launching January 2017. Rewards will be given to warriors participating in the beta as well as the winning faction.

This sounds like a testbed of Faction War, the metagame available at For Honor's release. It will be a persistent cross-platform struggle between the three factions, with each multiplayer fight impacting the world.

Players will earn War Assets according to their performance in matches. These War Assets can then be used to help conquer and defend territories. Each season will last ten weeks and at the end, players will receive rewards based on their faction's final rank. The Faction War will then reset and after a brief off-season period, a new struggle will begin.

Three heroes were also detailed in the press release: Shugoki, Warlord and Peacekeeper.

· Shugoki: Once the guardians of the Samurai, they have become as family. Massive and fierce, their weapon of choice is the kanabo, a huge stick that only they can wield efficiently. The Shugoki might not have the same agility as the other Samurai, but their rock-like resistance and demon-like strength make them an unavoidable force on the battlefield.
· Warlord: Warlord is a name from an ancient Viking tradition, a name that is earned by only the true leaders in combat, those who are ready to spend their whole life servicing all who need it. Warlords’ shields are as versatile as they are strong and their sword, while simple in design, is sharp and deadly.
· Peacekeeper: Selected from the desperate, the humbled or the devoted, they are sworn to secrecy by unbreakable oaths. Quick and lethal, they fight with a short sword in one hand and a dagger in the other. Peacekeepers are the deadliest duelists of all Assassins, capable of winning a fight before their enemy even knows they are here.

Eurogamer revealed today that future maps and modes will be added for free to avoid splitting the community. Game Director Damien Kieken said:

We don't want to split the community. So everything that's matchmade [including] new modes and new maps, will be given for free to the players. We'll also have other free content. We are a big team supporting the game after launch.

Last but not least, there's a new For Honor campaign trailer showcasing the main antagonist Apollyon. The campaign will be playable in both single player and co-op.

For Honor launches February 14th, 2017 for PC, PlayStation 4 and Xbox One.