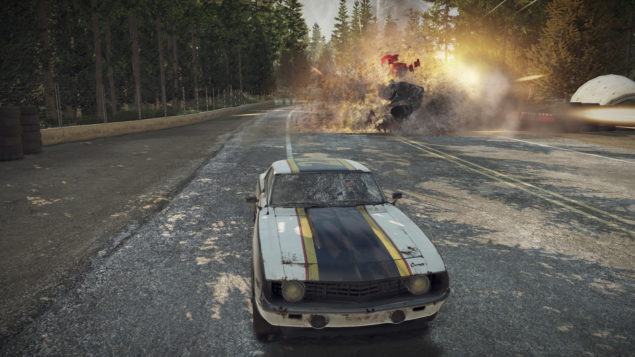 FlatOut 4: Total Insanity shows itself today for the first time in a series of screenshots.

A press release by publisher Strategy First also announced that the game is being developed by Tiny Rebel Games (the makers of the Doctor Who series of games) alongside Kylotonn Entertainment.

We’ve been fans of the Flatout franchise for years now for its focus on fun, accessible, over the top combative racing. The Kylotonn team brings tremendous experience in racing, and with them we hope to deliver a new FlatOut experience which pays homage to what fans love about the franchise yet goes beyond it in outrageousness, richness of environment and design, and community involvement.

In case you're feeling confused, FlatOut creators BugBear Entertainment are now working on their own IP, Next Car Game: Wreckfest, which is available on Steam Early Access.

FlatOut 4: Total Insanity will launch next year on PC, PlayStation 4 and Xbox One.