First Wonder Is A MDK Spiritual Successor; Crowdfunding In Q4 2015

Do you miss games like MDK, Earthworm Jim and Giants: Citizen Kabuto? If you do, First Wonder should make you happy. 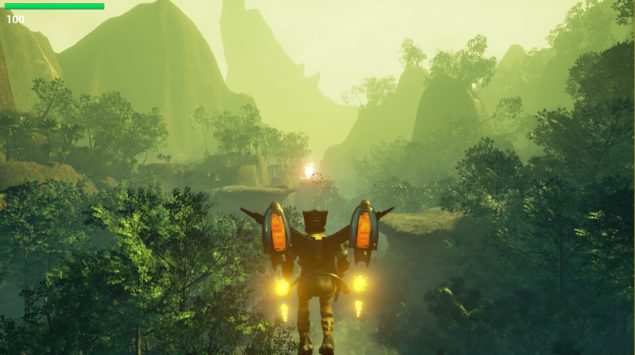 Developer Rogue Rocket Games, whose co-founders Nick Bruty and Richard Sun previously worked on the aforementioned games, has detailed its plan for the game.

First Wonder will get a hands-on teaser for First Wonder in the PAX Rising indie dev area (#4043) for public play, but in the meantime we have a trailer and some information for you.

When a greedy corporation tricks the planet’s peaceful inhabitants, the Majorcans, to give up their land to found a luxury resort, they accidentally awaken the slumbering giant Monstro.

Tasked with fulfilling an ancient prophecy, destruction follows in Monstro’s wake as he takes steps to accomplish his destiny-driven goal. The Cargonauts - an underprepared salvage team, way out of their league when Monstro awakens - take to the skies using their rocket technology in an attempt at matching Monstro’s natural gifts. To find and capture the terrifying beast, the Cargonauts must use their wits and a variety of tools and inventive traps.

First Wonder is an ambitious new game, aimed at existing fans of Giants: Citizen Kabuto and MDK, and newcomers alike. First Wonder features a unique blend of third-person shooter gameplay with an emphasis on verticality within an open-ended world ripe for exploration.

Players will alternatively take the reigns of both Monstro and the ragtag team of Cargonauts tasked with stopping him in the humor-laden, genre-defying First Wonder.

● Explore and discover the game-changing secrets of the Majorcan Islands!

● Play as the team of Cargonauts and as Monstro to learn both sides to First Wonder’s epic story.

● Track down and trap Monstro with a variety of tools as the Cargonaunts before he completes the mysterious ritual.

● Employ calculated maneuvers to avoid capture as Monstro by taking refuge in caves, spying on the Cargonauts from afar and exploiting the unique terrain.

Well, there's certainly a twist we don't see every day in games: playing both the heroes and the villain. First Wonder will go onto a crowdfunding campaign in Q4 2015 and we already know that it's targeting multiple platforms (likely, PC and consoles). Enjoy the trailer below!