Update: Catalyst 14.1 Beta Drivers Can be Downloaded from Here.

The guys over at Computerbase.de have received the Mantle Drivers directly from AMD and have released what is probably the first, independent, Mantle benchmark. All the speculation can die down now because we finally have a perfectly rounded system tested under Mantle, and you would be glad to know the result does not disappoint.

We already had Battlefield 4 Benchmarks before, but they were either from EA or AMD and in one or two cases were in some really odd configurations. However we finally have a Battlefield 4 mantle performance benchmark conducted by our friends over at Computerbase who share very interesting results. Without any further ado the benchmarks: 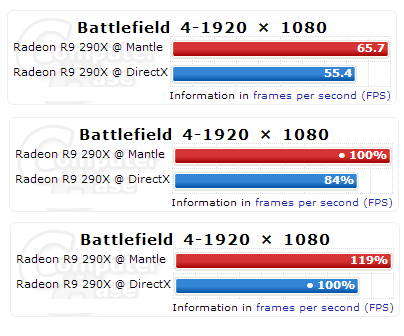 The test configuration as an i7-4770k running Windows 7 and overclocked to a decent 4.5Ghz. The graphic card was a Radeon (duh) R9 290X in Uber mode. The game was running at a resolution of 1920x1080 with 4x MSAA, FXAA and 16x AF.  Relatively speaking with Direct X as the base fps, there is a difference of 19% while with Mantle as the base fps there is an average difference of 16%. (The actual FPS difference and the one you should care about is about 17%).

They say that they will test many different scenarios but they just published this one benchmark to break the news. Interestingly if they have received a copy of Mantle Drivers then that means that the Public ones aren't far off and the delay is finally over. And there's another thing i would like to add, these guys tested Mantle on Single Player mode because naturally you cant get the same fps in a Multiplayer scenario. However if there was a way to do that, I think the Mantle improvement would actually be more since Multiplayer is more cpu intensive than single player.

Various tech sites have posted the Mantle performance preview which can be seen in the links given below:

The first independently conducted benchmark of #AMD Mantle API in #Battlefield4 is out. http://t.co/WEjmG29oUD