Remember Casio? Who doesn't! The company famous for its traditional watches has showcased its first Android Wear powered smartwatch at CES 2016, earlier today. 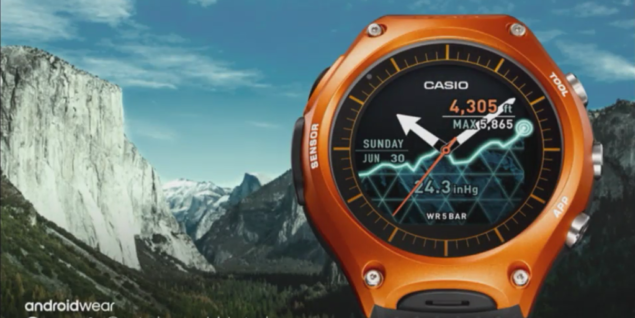 After a GPS connected watch last year, Casio takes a bigger stride at Las Vegas this time bringing Android to its watches - or at least one of them. Android Wear was launched back in 2014 with some successes coming from Motorola and Huawei. However, more traditional watchmakers are joining the list of Android Wear smartwatches now with TAG Heuer announcing its $1,500 Android Wear watch. Fossil has also announced its Q Founder, and now Casio comes with its Smart Outdoor Watch, WSD-F10.

Casio is popular for its rugged watches and bringing Android Wear to its Outdoor Watch, it aims to give both the traditional looks and the modern tech to its consumer. The Smart Outdoor Watch is a rugged watch too, with a 1.32-inch 320 x 300 screen, it has been styled quite similar to other Casio watches. It's a dual-layer LCD and brings a monochrome mode on board that can extend the battery life from a day to over a month! The WSD-F10 is built for outdoor, as its name suggests, and is water-resistant to 50 meters with MSL-STD-810 US military compliance. Casio Smart Outdoor Watch also comes with a pressure sensor, compass and accelerometer.

Since it's built for a niche market of outdoorsy folks, the watch will work with gloves and wet hands. Fitting beautifully with other outdoor watches from Casio, the smartwatch already looks like a success for the demographic it has been built for.

This latest Android Wear powered watch cannot be compared to others (except that it has kept the flat tire of Moto 360) since this is possibly the most rugged of all the available choices. While Motorola tried to combine tradition with style for everyday looks and TAG Heuer went to a more luxury side, Casio has built its smartwatch for the adventurous, traveler folks. Bringing the same Android Wear features, Casio has added several fitness apps along with custom watch faces that it calls "tools." Casio has added three buttons, including the Power, TOOL, and APP keys.

Casio's Smart Outdoor Watch is clearly designed and built, and doesn't seem to be missing the mark like more "traditional" smartwatches. The smartwatch is available in black, orange, red, and army green color tones and will retail for around $500. The Android Wear WSD-F10 is expected to be available in Japan starting from March while the US stores will stock it in early April.