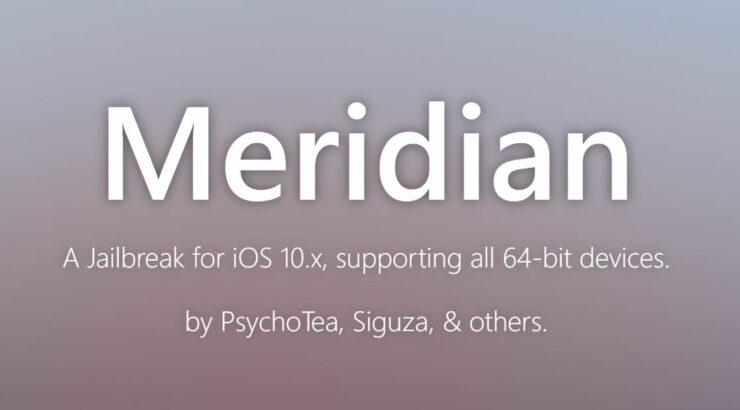 If you happen to own a 64-bit device running iOS 10, you would be pleased to know that a development team with PsychoTea, Siguaza, and others have released a new jailbreak tool. The Meridian Jailbreak tool was resting in the beta phase for quite a while and it is now being offered for device liberation purposes. As mentioned earlier, the Meridian tool will allow you to jailbreak your 64-bit devices running iOS 10.0 - 10.3.3. So let's dive in to see some more details on the matter.

Interested users would download the Meridian IPA file and use Cydia Impactor to sideload it onto their devices. From this point onwards, the process simply involves running the jailbreak process through the added "go" button in the middle of the tool's interface. Compared to other jailbreaks on the market, Meridian is sem-untethered in nature. So if you turn off or restart the device, you will have to re-run the Meridian app in order to jailbreak again.

If you're running iOS 10.0 - 10.3.3 and are not willing to update to the latest iOS firmware from Apple, you can go ahead and download the Meridian Jailbreak tool from meridian.sparkes.zone.

There will be more to the story, so be sure to stay tuned in for more details on the matter. This is all for now, folks. What are your thoughts on the new Meridian Jailbreak tool for 64-bit devices running iOS 10? Let us know in the comments.