The fact that there are many more apps available than most of us could care to sift through may be considered a "first-world problem," but aside from the App Store charts, finding the best-in-class can be incredibly difficult. When it comes to RSS readers, however, few can hold a candle to Feedly, and now, the iPhone app offers support to the Apple Watch.

The Apple Watch is, at this moment in time, still struggling to justify its existence. Despite being a pretty piece of wrist candy, it is rather limited in what it can actually do, leaving some consumers completely adverse to the idea of picking it up, while others have paid for, and quickly regretted, their purchase.

But the at-a-glance nature of Apple Watch seems well-placed for an app like Feedly, and thanks to the latest update to the iPhone iteration of the RSS utility, you can go now check updates on your Apple wearable. Like all good RSS readers, Feedly lets you create a customized, always-updating stream of content from different sites, and if you like to keep in the loop, very few can claim to do it better.

Version 27.0.2 of the iOS app lets you check through the top articles via the small screen, and from there you can mark stories as read, save them for later, or tag them as you please. 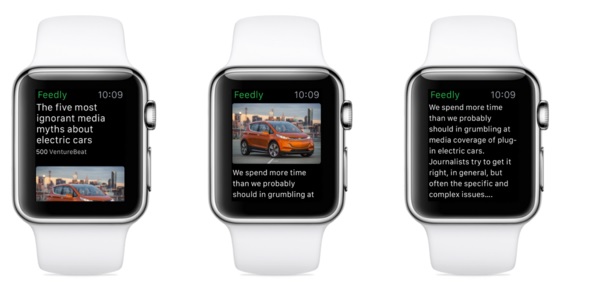 Thanks in part to services like Twitter and Reddit, which enable you to get the gist of any story on a particular topic very quickly, the day of curating RSS feeds feels like it may be slipping away. However, if you do like to follow regular updates from numerous publications, Feedly is the way to go in our humble opinion, and if you are an early adopter of the Apple Watch, then even more the reason not to miss out on this update.

As well as rolling out Apple Watch support, the latest update mentions references to "better search auto-completion" for the main app. So if you're constantly looking out for new feeds and content to follow, version 27.0.2 brings a lot to the table, and if you have yet to try Feedly on any platform, we strongly recommend hitting the download link at the bottom of this article.

The Feedly app for iOS is designed for the iPhone, iPod touch and iPad alike, but as with all Apple Watch apps, you will need your iPhone to act as the go-between. Apple does have plans to allow the development of standalone Apple Watch apps at some point later on in the year, but for now, the likes of Feedly can only be added to the wearable via the iPhone.