Ubisoft has released a set of amazing screenshots and some detailed artwork for the upcoming Far Cry Primal. 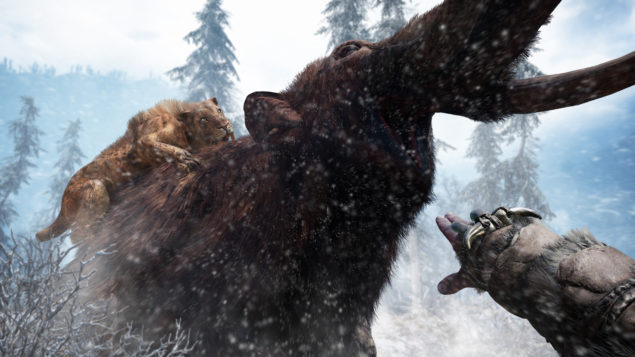 Primal received its first gameplay footage during The Game Awards last week, and now Ubisoft has released some new visuals to accompany the gameplay. Check out the gallery below.

Ubisoft's latest installment in the Far Cry series will release on PS4 and Xbox One on February 23rd. The PC version will be released on March 1st, 2016.  The publisher has announced that Far Cry Primal will receive 2 collector's editions. We have listed the contents of the different versions below:

Digital Content : all digital content available, a complete pack of ”Legend of the Mammoth” missions, a new weapon and 4 enhancements packs.
·         “Legend of the Mammoth” missions: Up to 45 minutes of additional gameplay, where the player will have the unique opportunity to play as the largest animal in Oros, the almighty mammoth, and feel the power to stomp its enemies and defend its herd from other beasts and humans.
o    Duel of beasts: A powerful rhino spirit dares to challenge your might. Battle him and his herd across treacherous cliffs to assert your dominance.
o    The trapped elder: Bloodthirsty hunters have trapped your leader. Crash their camp and lead the elder to freedom.
o    Hunt the hunter: The time for revenge is now. Lead your herd to crush those who threaten your survival.
·         A new weapon, the Blood Shasti Club: A bloodstained club of bone and teeth once wielded by Ull, the vicious leader of the Udam. This weapon is unbreakable and cannot be consumed by flame.
·         4 enhancement packs: Offers early access to rare resources and unique customisation options.

This edition includes the standard game plus all additional digital content:

Far Cry Primal brings players back to the Stone Age, a time of extreme danger and limitless adventure, when giant mammoths and sabretooth tigers ruled the Earth, a time when humans were not at the top of the food chain but were fighting to climb it. As the last survivor of his hunting group, the player will learn to craft a deadly arsenal, fend off fierce predators, and outsmart enemy tribes to conquer the land of Oros and become the Apex Predator.