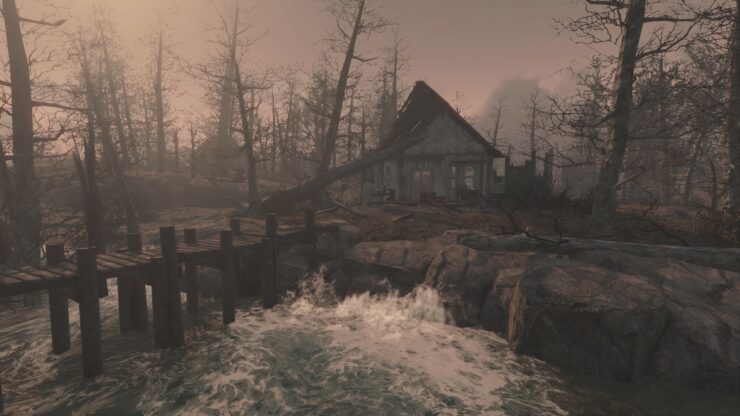 Fallout 4 is a massive game filled with secrets, and the Far Harbor DLC, released earlier this year on all formats, isn't any different, with plenty of secrets to discover on the new map. And it seems like players aren't yet done discovering the DLC pack's secrets, as one dedicated player has managed to detail a location that is visible off the coast, but cannot be reached.

Reddit user ColtonStuehrk posted a few hours ago a new bunch of screenshots which detail an island off the Far Harbor coast that cannot be reached, as it is outside the playable area. Thanks to the free cam, however, he has been able to check it out somewhat, discovering that's it quite detailed for a location that cannot be reached. You can check out the screenshots right below.

The Island
On it are three houses, and three sheds. Each house has placed objects, the sheds are empty. There is also one rowboat, nearly capsized in the center of the island.

The Island is out of the playable world-space, so I used the command "tfc" to enable the free-cam.
I was exploring the exterior of far harbor and I noticed the buildings in the distance, I tapped in the commands for free-cam and was pleasantly surprised when the screen did not turn into an empty sky-box, like what happens when you try to move out of the world-space in far harbor.

Yesterday, Bethesda revealed the details of the Fallout 4 1.7 update. The update includes support for the upcoming Nuka-World DLC as well as new store art type for Workshop elements and several fixes which should make the experience smoother and more enjoyable for most.

General optimization and stability improvements
Jun and Marcy Long are no longer essential after completing "Sanctuary"
Vendors can offer large shipments of Ceramic, Copper, Rubber, Steel and Wood
Improvements to accuracy and control with picking up and placing objects (not Workshop mode)
Grenades and molotov cocktails can now be used with the Junk Mortar (Contraptions)
Fixed issue with companions unequipping clothing when fast traveling with player
Fixed an issue with player animations not loading properly after reloading a saved game
Fixed issue where certain dog armors would not equip properly on Dogmeat
Fixed an issue where objects from Add Ons would not scrap correctly or would not be stored properly
Fixed infinite load that would occasionally occur while logging off while downloading a mod
Fixed a crash related to investing in a store while trading
Fixed issue where "Quartermastery" would send player to erroneous locations
Fixed performance issues related to dropping certain weapons
Fixed issue where melee weapon would not properly after dying and reloading the save
Fixed a rare issue where Sturges and Mama Murphy would stop moving
Fixed snapping issue with Surgery Center in Workshop mode

Increased the number of Mods that can be paged through Mods browsing menu
Fixed issue where Mods images would stop displayed while scrolling through Mods menu
Disable All Mods now works properly when offline
NPCs that are changed in a Mod will update changes like hairstyles properly
Fixed animation error related to NPCs changed in Mods who have died, and reloading the save without the Mod activated
Fixed issue where sneaking would turn player invisible while running with Mods
Master files no longer automatically sort above plugins in Load Order menu
Localization strings moved to Interface archive
Minor UI improvements to Mods menu and Mods Detail menus

Fallout 4 is now available in all regions on PC and consoles.