So some new 'images' of the AMD Radeon R9 390X have been floating around the Internet. We originally decided not to post these but then reverted on that in order to clarify our reason for not doing so. The images are pretty authentic looking and conform (mostly) to our leak of a few hours ago. Only problem is - they are completely fake and are essentially a Photoshop recreation of the image by an Artist on Chiphell forums.  The effort is impressive, so I decided to give it a post regardless. 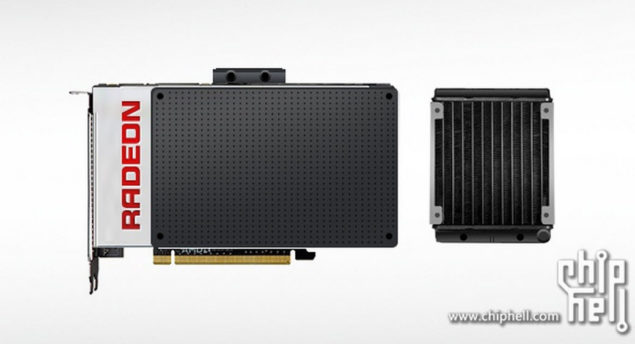 So how do we know the images are fake. Well, here they are in no order whatsoever. Firstly, the thread over at Chiphell sourced our own images and clearly mention doing so. A very senior member of the forum (and a very well known leaker of GPUs), Getwinder, debunked the image as an obvious fake too. Not convinced? Well, can't say I blame you, that is a pretty authentic looking shop. Given below is an ELA (Analysis). This simple test compares the different compression levels in an image, virtually allowing the user to spot shopped areas (since they will have different compression level than the rest of the image).

The ELR reveals that the document has at-least 3 different compression layers. The metal texture and the radiator were presumably taken (doctored) from the same photo whileas the  Radeon Logo and the PCI-E have been photoshopped in succeeding iterations. The PCI-E slot is actually of the Hawaii GPU and the logo has been taken from the Radeon R9 295X2! The edges of the pcb have a blue tint because the cropping was slightly sloppy and left compression errors. You might have noticed that alot of sites have been posting this image as the official renders of the AMD Radeon R9 390X - well now you know why we have not done so.

The fact of the matter is, the design features might even be slightly different in the retail version. The pictures we leaked are the pictures of the Radeon R9 390X WCE AMD as of right now, which might not be entirely the same aesthetic as the finished product that hits the shelves. Any entity claiming of having the final product look should really think twice before going ahead with the purported image. Anyways, I have to admit this was a beautiful peace of work and will most probably be pretty darn close to the final deal. In any case it will help us better visualize the AMD Radeon R9 390X.