Fake AMD processors are apparently making the rounds on authentic retailers like Amazon (via Computerbase.de). The first reports came as early as January. By fake I mean processors that are actually very old counterparts of themselves. More specifically, the customers noticed that the pins are actually not what they are supposed to be (of the FM2+ socket). We have contacted AMD for their word and will update this post or publish a new piece if its significant enough.

Counterfiet AMD Processors make the round on online retailers

Before I had investigated the matter fully I was really uncomfortable with using the word fake in this scenario thinking it was just a case of people getting older products accidentally. However, upon closer introspection that doesn't appear to be the case. Before we go over that, an example of an unsuspecting user getting a fake processor can be found in this verified Amazon Review. Basically the guy requested an A8-7600 APU and instead received an Athlon 64 X2 5200 (Brisbane) processor. Which is actually the AM2 socket. This particular processor dates back to 2007 and 2009. 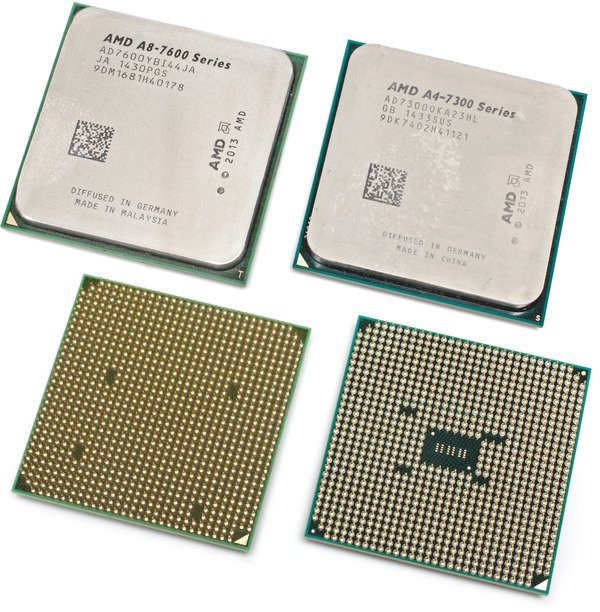 A comparison of fake and real AMD Processors @Computerbase.de

Most alarmingly perhaps the processor actually has the heatspreader of the correct product, but is actually a much older processor inside. Users were able to identify the fake product from the real one by the pin layout (AM2 vs FM2+) and appears to be a good practice for everyone to observe. They also make a point to mention that if you feel the processor isn't fitting in the seat, don't force it in and instead check it for possible unauthenticity.

It gets even worse than that. Apparently not all of the fake processors even work. In what appears to be an extremely alarming case, the holographic seal appears to be present too. It looks like a proper fraud setup where someone is actually bothering to create authentic looking counterfeits to sell them on authorized retailers. I am sure AMD is investigating the matter fully and will report back once they respond to our contact.